Catherine Newman, author of We All Want Impossible Things, with Joanna Rakoff

Porter Square Books welcomes Catherine Newman, author of We All Want Impossible Things, to the store for a conversation with Joanna Rakoff! This event will take place on Monday, January 30 at 7pm at Porter Square Books (25 White St. Cambridge, MA 02140). RSVP below to let us know you're coming! 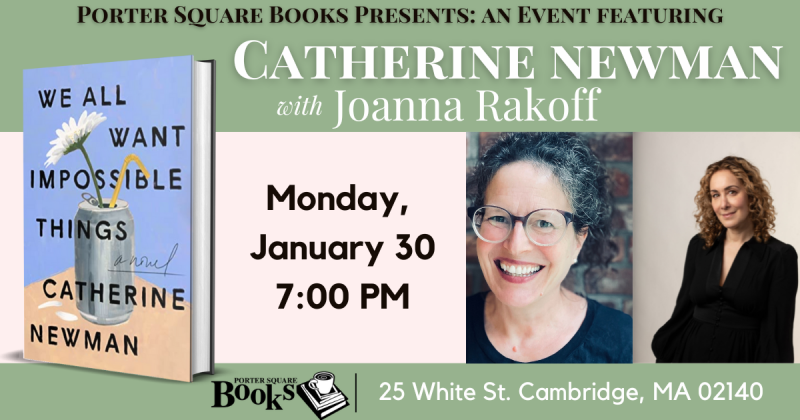 For lovers of Meg Wolitzer, Maria Semple, and Jenny Offill comes this raucous, poignant celebration of life, love, and friendship at its imperfect and radiant best.

Edith and Ashley have been best friends for over forty-two years. They’ve shared the mundane and the momentous together: trick or treating and binge drinking; Gilligan’s Island reruns and REM concerts; hickeys and heartbreak; surprise Scottish wakes; marriages, infertility, and children. As Ash says, “Edi’s memory is like the back-up hard drive for mine.”

But now the unthinkable has happened. Edi is dying of ovarian cancer and spending her last days at a hospice near Ash, who stumbles into heartbreak surrounded by her daughters, ex(ish) husband, dear friends, a poorly chosen lover (or two), and a rotating cast of beautifully, fleetingly human hospice characters.

As The Fiddler on the Roof soundtrack blasts all day long from the room next door, Edi and Ash reminisce, hold on, and try to let go. Meanwhile, Ash struggles with being an imperfect friend, wife, and parent—with life, in other words, distilled to its heartbreaking, joyful, and comedic essence.

For anyone who’s ever lost a friend or had one. Get ready to laugh through your tears.

Catherine Newman is the author of the memoirs Catastrophic Happiness and Waiting for Birdy, the middle-grade novel One Mixed-Up Night, the kids’ craft book Stitch Camp, the best-selling how-to books for kids How to Be a Person and What Can I Say? and the new novel We All Want Impossible Things. She edits the non-profit kids' cooking magazine ChopChop, wrote the etiquette column for Real Simple magazine for 10 years, and has written for the New York Times, O, The Oprah Magazine, Parents magazine, Cup of Jo, and many other publications. She lives in Amherst, Massachusetts, with her family.

Joanna Rakoff is the author of the international bestselling memoir My Salinger Year and the bestselling novel A Fortunate Age, winner of the Goldberg Prize for Fiction and the Elle Readers’ Prize. Rakoff’s books have been translated into twenty languages, and the film adaptation of My Salinger Year opened in theaters worldwide in 2021 and is now streaming. She has been the recipient of fellowships and residencies from MacDowell, Sewanee, Bread Loaf, Jerome Foundation, Authors’ Guild, PEN, Ragdale Foundation, Art OMI/Ledig House, and Saltonstall; and has taught at Columbia University, Brooklyn College, and Aspen Words. Her writing has appeared in The New York Times, The Guardian, O: The Oprah Magazine, Vogue, Elle, Porter, and elsewhere, and her new memoir, The Fifth Passenger, is forthcoming from Little, Brown in 2024.

We All Want Impossible Things: A Novel (Hardcover)