Clea Simon, A Spell of Murder 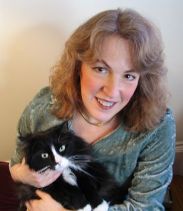 "It's Harriet's fault. It's always her fault, not that she'll ever admit it." So begins A Spell of Murder, a Witch Cats of Cambridge mystery, the first in a new cozy series that mixes feline fiction with a touch of the paranormal, and a little romance as well. Becca, newly single and newly unemployed, wants to believe she has psychic powers. With nothing but time - and a desire for empowerment - she's studying to become a witch. What she doesn't know is that her three cats - Harriet, Laurel, and Clara - are the ones with the real power. And when Harriet - "a cream-colored longhair with more fur than commonsense" - conjures a pillow for her own comfort, Becca believes her spells are finally working. Could that be why Trent, the coven's devilishly handsome leader, has been showing her special attention? Or why Suzanne, a longtime coven member, draws her aside to share a secret - a confidence that may lead to murder?

A former journalist and music critic, Clea Simon wrote three nonfiction books, including the Boston Globe bestseller The Feline Mystique, before turning to a life of crime (fiction). Her more than two dozen mysteries usually involve cats or rock and roll, or some combination thereof. A native of New York, she moved to Massachusetts to attend Harvard and now lives nearby in Somerville.

A Spell of Murder (Witch Cats of Cambridge #1) (Hardcover)