Join Porter Square Books for a virtual event with Daniel José Older and Alyssa Wong to celebrate the release of Star Wars: The High Republic Adventures, Vol. 1! This event is virtual, free & open to all, hosted on Crowdcast. 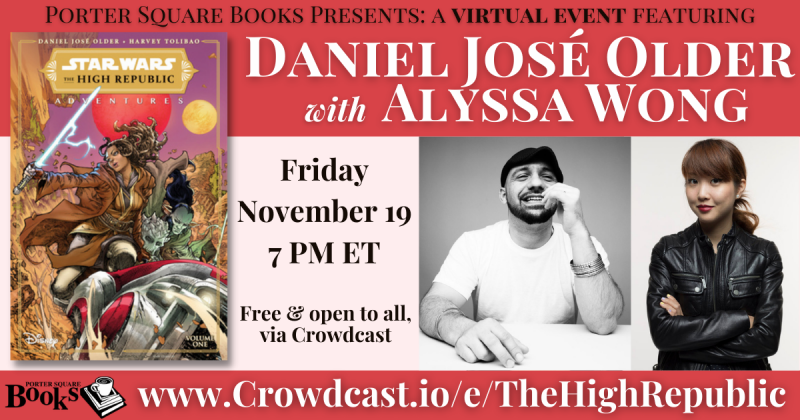 Centuries before the events of the Skywalker Saga, the galaxy is experiencing unparalleled peace—until a new enemy threatens everything the Jedi have built.

In the days of the High Republic, the Jedi are at the height of their power. But the emergence of the piratical, anarchic Nihil proves that even the most successful peace is fragile, and the Jedi's influence is neither as pervasive nor as benevolent as they would believe.

Now Lula, Farzala, and Qort, inexperienced Jedi Padawans, must help the inhabitants of Trymant IV in the wake of a Nihil attack. All the while, they’ll face suspicion and outright opposition from a group of subversive citizens who resent and fear the Jedi. Two of those citizens, Zeen and Krix, will have to decide whether to accept the Padawans’ aid or try to save the day on their own.

Star Wars: The High Republic Adventures is part of a broader publishing initiative exploring a mysterious, bygone era of the Galactic Republic through comics and prose.

Daniel José Older is the New York Times bestselling author of Flood City, the middle-grade Dactyl Hill Squad series, The Book of Lost Saints, the Bone Street Rumba series, Star Wars: Last Shot, and the YA Shadowshaper Cypher series, which won the International Latino Book Award and was shortlisted for a Kirkus Prize, the Andre Norton Award, the Locus, and named one of Esquire's 80 Books Every Person Should Read. He is a lead story architect on Star Wars' The High Republic and co-writer of the upcoming graphic novel Death's Day.

Alyssa Wong writes fiction, comics, and games. Her stories have won the Nebula Award, the World Fantasy Award, and the Locus Award. She was a finalist for the John W. Campbell Award for Best New Writer, and her fiction has been shortlisted for the Hugo, Bram Stoker, and Shirley Jackson Awards. Her comics credits include Marvel, Star Wars, and Adventure Time. She has also written for Overwatch, and Story and Franchise Development at Blizzard Entertainment. Alyssa lives in California and can be found on Twitter as @crashwong.