Virtual: Jennifer De Leon with Celeste Ng, Don't Ask Me Where I'm From

Porter Square Books is delighted to host the virtual launch of Jennifer De Leon's debut young adult novel Don't Ask Me Where I'm From, with special guest Celeste Ng and co-sponsored by our friends at 826 Boston! This event is free and open to all, and is hosted on Crowdcast.

Author Jennifer De Leon is a former Boston Public School teacher, and she has a goal: to provide a copy of Don't Ask Me Where I'm From to every ninth grade student at O'Bryant High School! Porter Square Books has set up a wish list, and we're hoping to raise the 365 copies for O'Bryant students with your help. You can purchase a copy to donate to a student and a copy for yourself below! 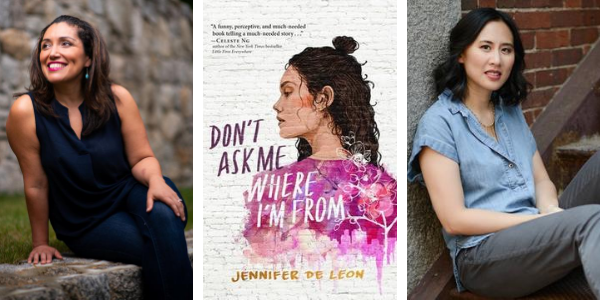 Register to join the event on Crowdcast here: https://www.crowdcast.io/e/dontaskme

In Don't Ask Me Where I'm From, first-generation American LatinX Liliana Cruz does what it takes to fit in at her new nearly all-white school. But when family secrets spill out and racism at school ramps up, she must decide what she believes in and take a stand.

Liliana Cruz is a hitting a wall—or rather, walls.

There’s the wall her mom has put up ever since Liliana’s dad left—again.

And there’s the wall Liliana creates within herself, because to survive at Westburg, she can’t just lighten up, she has to whiten up.

But a wall isn’t always a barrier. It can be a foundation for something better. And Liliana must choose: Use this foundation as a platform to speak her truth, or risk crumbling under its weight.

Jennifer De Leon is an author, editor, speaker, and creative writing professor who lives outside of Boston. She is the editor of Wise Latinas: Writers on Higher Education, the 2015–2016 Writer-in-Residence at the Boston Public Library, and a 2016–2017 City of Boston Artist-in-Residence. She is also the second recipient of the We Need Diverse Books grant. Don’t Ask Me Where I’m From is her debut novel.

Celeste Ng grew up in Pittsburgh, Pennsylvania, and Shaker Heights, Ohio. She graduated from Harvard University and earned an MFA from the University of Michigan. Her debut novel, Everything I Never Told You, was a New York Times bestseller and winner of the Massachusetts Book Award, the Asian/Pacific American Award for Literature, and the ALA’s Alex Award. Little Fires Everywhere, Ng’s second novel, was a New York Times bestseller, winner of the Ohioana Book Award, and named a best book of the year by over twenty-five publications. Her books have been translated into more than thirty languages and she was the recipient of a fellowship from the National Endowment for the Arts. She lives in Cambridge, Massachusetts.

826 Boston is a nonprofit youth writing and publishing organization that empowers traditionally underserved students ages 6-18 to find their voices, tell their stories, and gain communication skills to succeed in school and in life.

Don't Ask Me Where I'm From (Hardcover)

Donate a copy of Don't Ask Me Where I'm From to an O'Bryant High School student!