Porter Square Books is thrilled to welcome Douglas Bauer, author of The Beckoning World, for a conversation with Jack Beatty.

This event will take place on Thursday, November 17 at 7pm at Porter Square Books (25 White St. Cambridge, MA 02140). Masks are required for all attending this event. RSVPs, while not required, are strongly encouraged- scroll down to RSVP below! 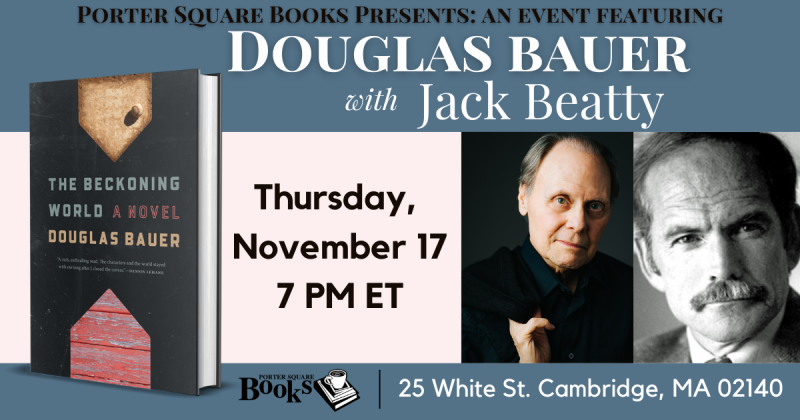 The Beckoning World is set in the first quarter of the twentieth century and follows Earl Dunham. His weeks are comprised of six days mining coal, followed by Sundays playing baseball. Then one day a major-league scout happens on a game, signs Earl, and he begins a life he had no idea he could even dream.

But dreams sometimes suffer from a lovely abundance, and in Earl’s case her name is Emily Marchand. They fall quickly and deeply in love, but with that love comes heartbreaking complications.

The Beckoning World gathers a cast of characters that include Babe Ruth and Lou Gehrig; a huge-hearted Pullman steward offering aphoristic wisdom; and countless others, not least of which is the 1918 Spanish flu taking vivid spectral form. At the center is a relentless love that Earl and Emily are defenseless against, allied as they are “in this business of their hearts.”

Jack Beatty is a senior editor of The Atlantic and news analyst for On Point, the national NPR news and public affairs program. His book The Rascal King, on legendary Boston mayor James Michael Curley, won an American Book Award, was shortlisted for the NBCC award, and was one of USA Today‘s 10 Best Books of the Year. He was the editor of Colossus, a book on corporations, which was named one of the 10 Best Business Books of the Year by Business Week. He was a Poynter Fellow at Yale, the recipient of a Guggenheim Fellowship, two Alfred P. Sloan Foundation research grants, a William Allen White Award for Criticism, and shared an Olive Branch Award for an Atlantic article on arms control. He lectures frequently throughout the country

The Beckoning World: A Novel (Paperback)