Join Porter Square Books for a virtual event celebrating the release of "must-have compendium" (Publishers Weekly, starred review) Gastro Obscura: A Food Adventurer's Guide, with author and cofounder of Atlas Obscura Dylan Thuras! He will be joined in conversation by fellow Atlas Obscura cofounder Joshua Foer. This event is free and open to all, hosted on Crowdcast. 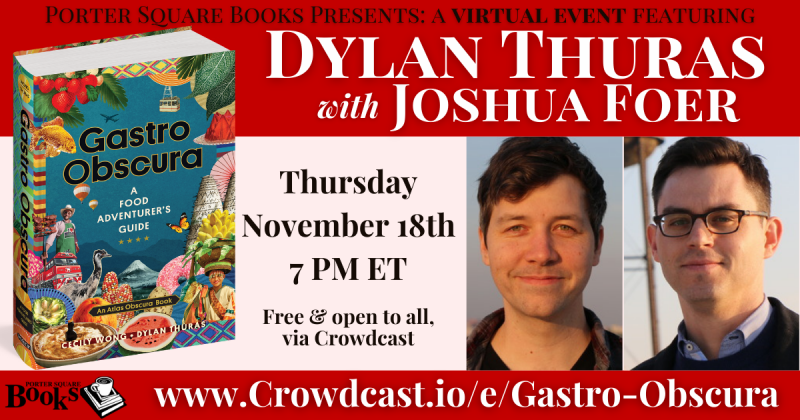 Register to join the event on Crowdcast here: https://www.crowdcast.io/e/gastro-obscura

Taste the world! It’s truly a feast of wonder: Created by the ever-curious minds behind Atlas Obscura, this breathtaking guide transforms our sense of what people around the world eat and drink. Covering all seven continents, Gastro Obscura serves up a loaded plate of incredible ingredients, food adventures, and edible wonders. Ready for a beer made from fog in Chile? Sardinia’s “Threads of God” pasta? Egypt’s 2000-year-old egg ovens? But far more than a menu of curious minds delicacies and unexpected dishes, Gastro Obscura reveals food’s central place in our lives as well as our bellies, touching on history–trace the network of ancient Roman fish sauce factories. Culture–picture four million women gathering to make rice pudding. Travel–scale China’s sacred Mount Hua to reach a tea house. Festivals–feed wild macaques pyramid of fruit at Thailand’s Monkey Buffet Festival. And hidden gems that might be right around the corner, like the vending machine in Texas dispensing full sized pecan pies. Dig in and feed your sense of wonder.

Dylan Thuras is the cofounder and creative director of Atlas Obscura, and coauthor of the #1 New York Times bestseller Atlas Obscura: An Explorer’s Guide to the World’s Hidden Wonders and the New York Times bestselling kids book An Explorer's Guide for the World's Most Adventurous Kid. Dylan is the host of The Atlas Obscura Podcast, has been a host on the NYTimes T-Brand podcast So You Want to Work Abroad, a correspondent for NPR’s All Things Considered, as well as a guest on CBS Sunday Morning and Science Friday and in print in the New York Times, the New Yorker, and Men’s Health. As a speaker on travel and media he has spoken at the New Yorker festival, SXSW, La Ciudad de las Ideas, EG, and Destinations International among others. Dylan’s pursuit of the unusual began when he was a teenager exploring abandoned buildings in the Midwest, and it eventually took him to Budapest for a year, where he and his wife Michelle Enemark explored and wrote about the history of Eastern Europe. He lives with Michelle and their two children, Phineas and Jean, in New York’s Hudson Valley. Visit him online at @dylanthuras.

Joshua Foer was born in Washington, DC  and lives in Brookline, MA. His writing has appeared in The New Yorker, National Geographic, Esquire, Slate, Outside, the New York Times, and other publications. Moonwalking with Einstein, an international best seller published in 34 languages, is his first book Josh is the co-founder of the online guide to the world’s wonders & curiosities, Atlas Obscura, and co-author of the #1 NYT best seller Atlas Obscura: An Explorer’s Guide to the World’s Hidden Wonders. He is also the co-founder of the non-profit Sefaria, and of the design competition Sukkah City.

Atlas Obscura is the definitive guide to the world’s hidden wonders. Based on the community-driven, editor-curated website atlasobscura.com, Atlas Obscura uncovers unusual and overlooked places not found in your average guidebook. Cofounders Joshua Foer and Dylan Thuras are two of the authors of the # 1 New York Times bestselling book Atlas Obscura: An Explorer’s Guide to the World’s Hidden Wonders.

Register to join the event on Crowdcast here: https://www.crowdcast.io/e/gastro-obscura