Elizabeth Benedict, Mameve Medwed, and Charlotte Silver, What My Mother Gave Me 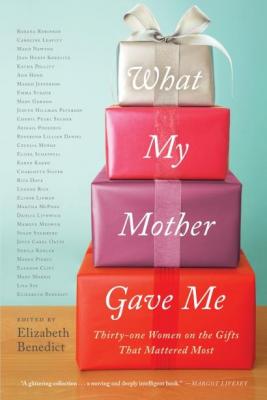 In What My Mother Gave Me, women look at the relationships between mothers and daughters through a new lens: a daughter’s story of a gift from her mother that has touched her to the bone and served as a model, a metaphor, or a touchstone in her own life. The contributors of these thirty-one original pieces include Pulitzer Prize winners, perennial bestselling novelists, and celebrated broadcast journalists.

Collectively, the pieces have a force that feels as elemental as the tides: outpourings of lightness and darkness; joy and grief; mother love and daughter love; mother love and daughter rage. In these stirring words we find that every gift, no matter how modest, tells the story of a powerful bond. As Elizabeth Benedict points out in her introduction, whether we are mothers, daughters, aunts, sisters, or cherished friends, we may not know for quite some time which presents will matter the most.

Elizabeth Benedict is the author of five novels, including the bestseller Almost and the National Book Award finalist Slow Dancing, as well as The Joy of Writing Sex: A Guide for Fiction Writers. She is the editor of the anthology Mentors, Muses & Monsters: 30 Writers on the People Who Changed Their Lives. She has written for numerous publications including the New York Times, Boston Globe, and Huffington Post and two of her essays were Notable Essays in Best American Essay Collections.

Mameve Medwed is the author of the novels Mail, Host Family, The End of an Error, How Elizabeth Barrett Browning Saved My Life and Of Men and Their Mothers. Her stories, essays, and book reviews have appeared in, among others, the New York Times, Gourmet, Boston Globe, the Missouri Review, Newsday, and the Washington Post.

Charlotte Silver is the author of the bestseller Charlotte au Chocolat: Memories of a Restaurant Girlhood. Her second book, a young adult novel called The Chaperone, is forthcoming from Roaring Brook Press. She studied writing at The Bread Loaf Writers’ Conference and has been published in the New York Times.

What My Mother Gave Me: Thirty-one Women on the Gifts That Mattered Most (Paperback)