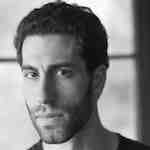 "Exposing patriarchal and capitalistic practices that often cripple society, Ezra Dan Feldman’s Habitat of Stones reveals the symptoms of living in a post-industrial and illusional, high-tech world: 'He’s taken the world for a machine, a baby for a doll, a gun for a candy bar, which he offered to everyone. He once mistook a hammer for his own hand. Once he made love to a wall.' Finally, Habitat of Stones directs us back to the natural world that recharges the human psyche, where a limb touched 'touches you back / electrically; you’ll feel it moving in itself ten billion times / faster than a continental shelf.'" — Mark Irwin

Ezra Dan Feldman will be a Visiting Assistant Professor of English at Williams College beginning in Fall 2017. His book, Habitat of Stones was selected by Mark Irwin for the Patricia Bibby First Book Award, and is published by Tebot Bach