Join Porter Square Books for a virtual panel with three fantastic debut YA writers, Faridah Àbíké-Íyímídé (Ace of Spades), Christina Hammonds Reed (The Black Kids), and Namina Forna (The Gilded Ones)! Hear about these wonderful books and the debut experience in a talk moderated by PSB bookseller and author of the forthcoming Briar Girls,  Rebecca Kim Wells. This event is free and open to all, hosted on Crowdcast. We will have signed book plates from Faridah for your copy of Ace of Spades while supplies last - request a signed copy in your order comments! 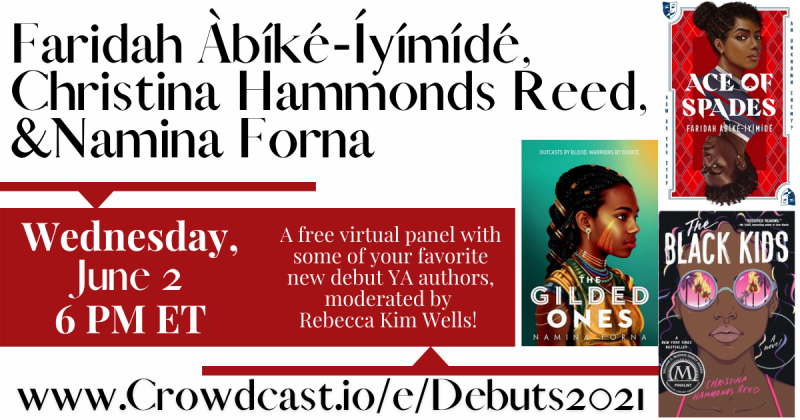 Register to join the event on Crowdcast here: https://www.crowdcast.io/e/debuts2021

Gossip Girl meets Get Out in Ace of Spades, a YA contemporary thriller by debut author Faridah Àbíké-Íyímídé about two students, Devon & Chiamaka, and their struggles against an anonymous bully.  Faridah Àbíké-Íyímídé is a writer from South London who has dreamt of writing books about black kids saving (or destroying) the world all her life. She is an avid tea drinker, and a collector of strange mugs. Faridah currently studies English Literature at a university in the Scottish Highlands. She is the author of Ace of Spades.

Perfect for fans of The Hate U Give, The Black Kids is an unforgettable coming-of-age debut novel explores issues of race, class, and violence through the eyes of a wealthy black teenager whose family gets caught in the vortex of the 1992 Rodney King Riots. Christina Hammonds Reed holds an MFA from the University of Southern California’s School of Cinematic Arts. A native of the Los Angeles area, her work has previously appeared in the Santa Monica Review and One Teen Story. Her first novel, The Black Kids, was a New York Times bestseller and William C. Morris Award Finalist.

In The Gilded Ones, the most anticipated fantasy of 2021, girls are outcasts by blood and warriors by choice. When Deka's blook marks her impure in the eyes of her village, she risks it all to leave the only life she's ever known. But many surprises await in the great walled city in this start to a bold and immersive fantasy series for fans of Children of Blood and Bone and Black Panther. Namina Forna has a MFA in film and TV production from USC School of Cinematic Arts and a BA from Spelman College. She now works as a screenwriter in LA and loves telling stories with fierce female leads. The Gilded Ones is her debut novel.

Rebecca Kim Wells is the author of the Shatter the Sky duology and Briar Girls. Her debut novel, Shatter the Sky, was a New England Book Award Finalist, a Bisexual Book Award winner, a Rainbow List selection, an Indies Introduce selection, and a Kids’ Indie Next Pick. When not writing, she works at a fiercely independent bookstore in Massachusetts and spends too much time singing along to musicals.

Register to join the event on Crowdcast here: https://www.crowdcast.io/e/debuts2021

The Gilded Ones (Hardcover)