Grubbie Debut: Boyah J. Farah, author of American Made Me a Black Man, in conversation with Eve Bridburg

RSVP below to let us know you're coming to the in person event and to receive event updates. You can also attend virtually via Crowdcast at this link! 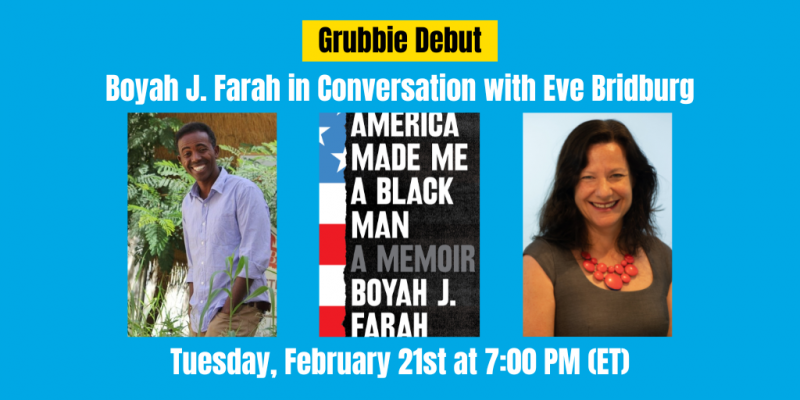 A searing memoir of American racism from a Somalian-American who survived hardships in his birth country only to experience firsthand the dehumanization of Blacks in his adopted land, the United States.

“No one told me about America.”

Born in Somalia and raised in a valley among nomads, Boyah Farah grew up with a code of male bravado that helped him survive deprivation, disease, and civil war. Arriving in America, he believed that the code that had saved him would help him succeed in this new country. But instead of safety and freedom, Boyah found systemic racism, police brutality, and intense prejudice in all areas of life, including the workplace. He learned firsthand not only what it meant to be an African in America, but what it means to be African American. The code of masculinity that shaped generations of men in his family could not prepare Farah for the painful realities of life in the United States.

Lyrical yet unsparing, America Made Me a Black Man is the first book-length examination of American racism from an African outsider’s perspective. With a singular poetic voice brimming with imagery, Boyah challenges us to face difficult truths about the destructive forces that threaten Black lives and attempts to heal a fracture in Black men’s identity.

Boyah J. Farah’s writing has been featured in The Guardian, Harvard Transition, Scheer Intelligence at KCRW, Grub Daily and Truthdig. His essays have appeared in Harvard’s Kennedy School Review, Pangyrus magazine, and The Huffington Post, and he is the winner of Salon‘s best essay of 2017. He recently founded the Abaadi School in Garowe, Somalia, which offers instruction in English, Math and Science to boys and girls ages 13-24. Boyah divides his time between Boston and Somalia. America Made Me a Black Man is his first book.

Eve Bridburg is the Executive Director of GrubStreet. Under her leadership, GrubStreet has grown into a national literary powerhouse known for artistic excellence, working to democratize the publishing pipeline and program innovation. An active partner to the Mayor’s Office of Arts and Culture, Eve was the driving force behind securing chapter 91 space in the Seaport to build a creative writing center. The Barr Foundation recently named her a 2019 Barr Fellow in recognition of her leadership. Having graduated from its inaugural class, Eve remains active with the National Arts Strategies Chief Executive Program, a consortium of 200 of the world’s top cultural leaders, which addresses the critical issues that face the arts and cultural sector worldwide. Eve has presented on the future of publishing, what it takes to build a literary arts center, and the intersection of arts and civics at numerous local and national conferences. Her essays and op-eds on publishing, the role of creative writing centers and the importance of the narrative arts have appeared in The Boston Globe, Huffington Post, Cognoscenti, Writer's Digest and TinHouse. Eve serves on the Advisory Board of The Loop Lab, a new Cambridge-based nonprofit dedicated to increasing representation in the Media Arts. Eve worked as a literary agent at The Zachary Shuster Harmsworth Literary Agency for five happy years where she developed, edited, and sold a wide variety of books to major publishers. Before starting GrubStreet, she attended Boston University’s Writing program on a teaching fellowship, farmed in Oregon, and ran an international bookstore in Prague.

America Made Me a Black Man: A Memoir (Hardcover)