GRUBBIE DEBUTS: Neema Avashia with E. B. Bartels, Another Appalachia: Coming Up Queer and Indian in a Mountain Place [In-Person, BOSTON]

Register for the Crowdcast here: https://www.crowdcast.io/e/neemaavashia 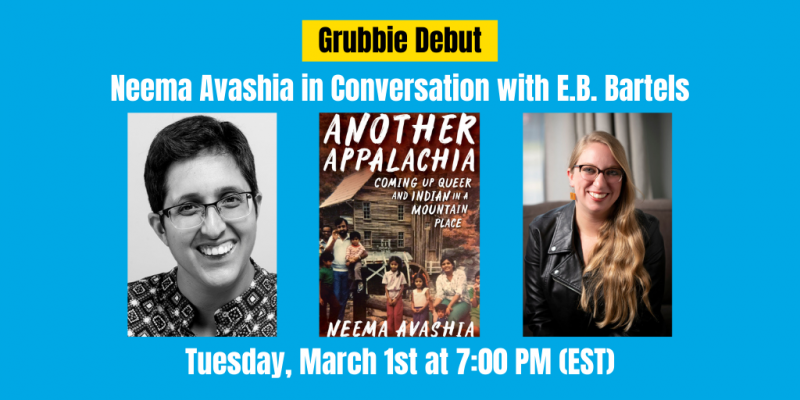 “Commands your attention from the first page to the last word.” —Morgan Jerkins

When Neema Avashia tells people where she’s from, their response is nearly always a disbelieving “There are Indian people in West Virginia?” A queer Asian American teacher and writer, Avashia fits few Appalachian stereotypes. But the lessons she learned in childhood about race and class, gender and sexuality continue to inform the way she moves through the world today: how she loves, how she teaches, how she advocates, how she struggles.

Another Appalachia examines both the roots and the resonance of Avashia’s identity as a queer desi Appalachian woman, while encouraging readers to envision more complex versions of both Appalachia and the nation as a whole. With lyric and narrative explorations of foodways, religion, sports, standards of beauty, social media, gun culture, and more, Another Appalachia mixes nostalgia and humor, sadness and sweetness, personal reflection and universal questions.

Neema Avashia was born and raised in southern West Virginia to parents who immigrated to the United States. She has been a middle school teacher in the Boston Public Schools since 2003. Her essays have appeared in the Bitter Southerner, Catapult, Kenyon Review Online, and elsewhere.

E.B. Bartels is a nonfiction writer, a former Newtonville Books bookseller, and a GrubStreet instructor, with an MFA from Columbia. Her writing has been published in Catapult, The Rumpus,The Millions, and The Toast. She lives in Massachusetts.

Interested in joining our event on 3/1 with Neema Avashia and E. B. Bartels? Please RSVP here to get event updates, including venue and more!

Another Appalachia: Coming Up Queer and Indian in a Mountain Place (Paperback)