Porter Square Books and GrubStreet are pleased to present the virtual launch of novelist and GrubStreet member Sebastian Stuart's debut memoir, What Wasn't I Thinking? A Story of Rebellion, Madness and Surviving My Family, as part of our Grubbie Debut series! He will be joined in conversation by Christopher Castellani, artistic director of GrubStreet. This event is free and open to all, hosted on Crowdcast. 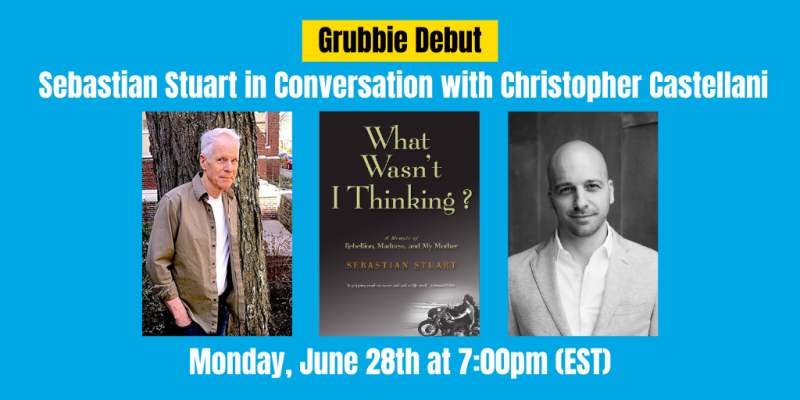 Register for the event on Crowdcast here: https://www.crowdcast.io/e/whatwasntithinking

Coming in June 2021, novelist Sebastian Stuart’s hilarious and moving memoir, What Wasn’t I Thinking? A Story of Rebellion, Madness, and Surviving My Family. It chronicles growing up in Manhattan in the 1950s, his “turn on and drop out” hippie life in San Francisco in the 1960s. Set against the backdrop of a repressed family navigating the world of mental illness and long-kept secrets. The book also looks at gay cruising and street hustling, theater, and romance, with appearances by Arthur Miller, Liza Minnelli, Clint Eastwood, Bette Midler, Mia Farrow, and more. Alysia Abbott, author of the acclaimed Fairyland: A Memoir of My Father, calls What Wasn’t I Thinking? “A sexy joy ride of a story.”

Sebastian Stuart has published 9 novels, four under his own name, four “co-written” and one ghostwritten. The list includes a national bestseller published in eight languages, and a New York Times bestseller. His novel The Hour Between was an NPR Season’s Readings selection and won the Ferro-Grumley Award as best LGBT novel of the year. As a playwright he was dubbed “the poet laureate of the East Village” by Michael Musto in the Village Voice. His work has been seen at La Mama, the Public Theater, the Kitchen, and other venues, and he has won grants from the Edward Albee Foundation and the Jerome Foundation. His screenplays have been optioned by Lee Grant, Sondra Locke, and others. Sebastian has also written over a score of original e-books, as well as travel guides, business books, fundraisers -- and a cookbook! He lives in Cambridge, Massachusetts with his partner of 30 years, novelist Stephen McCauley.

Christopher Castellani is the author of five books, most recently the novel Leading Men, for which he received fellowships from the Guggenheim Foundation, the Massachusetts Cultural Council, and MacDowell. The screen adaptation of Leading Men is currently being written by Matthew Lopez (The Inheritance) and produced by Luca Guadagnino and Peter Spears (Call Me By Your Name).  Christopher is on the fiction faculty of the Warren Wilson MFA Program and the Bread Loaf Writers’ Conference. He lives in Provincetown and Boston, where he is artistic director of GrubStreet.

Register for the event on Crowdcast here: https://www.crowdcast.io/e/whatwasntithinking

What Wasn't I Thinking? (Paperback)