Grubbie Debuts: Steve Almond with Jane Roper, All The Secrets of the World

Porter Square Books is thrilled to present the latest installment of the Grubbie Debuts series featuring GrubStreet author Steve Almond for All The Secrets of the World. Almond will be joined in conversation by GrubStreet instructor Jane Roper for this event, which will take place at Porter Square Books: Boston Edition on Monday, May 2 at 7:00pm.

In-person attendees will be required to wear masks for the duration of the event and show proof of vaccination upon entry. This hybrid in person event will also support virtual attendance. For those of you who'd prefer to attend virtually or missed your chance to reserve an in-person seat, you can watch live on Crowdcast or tune in to the recorded video later on the Porter Square Books Facebook.

Register to watch the virtual event live on Crowdcast here!

Update: seating to this event will be first-come, first-serve! We will have 65 spots to watch the event live, and anyone who arrives after we've hit capacity will be directed to a viewing party upstairs. All will be invited to join the signing line and reception downstairs following the talk! If you registered prior to Tuesday 4/26, you should have received an email confirmation. If you've registered on the waitlist since then, you'll be receiving a confirmation on Monday with all of the event details. Thank you! 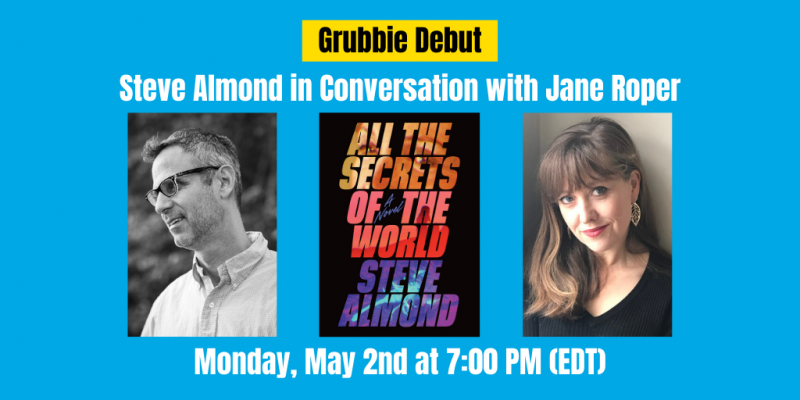 "The scorpion hunts while the rest of us dream. That's why he knows all the secrets of the world."

It's 1981 in Sacramento, and thirteen-year-old Lorena Saenz has just been paired with Jenny Stallworth for the science fair by a teacher hoping to unite two girls from starkly different worlds. Lorena begins to spend time at the Stallworth residence and finds herself seduced, not just by Jenny but her parents: Rosemary, her glamorous, needy mother, and Marcus, a scorpiologist who recognizes Lorena's passion for learning and her confused desires.

When Lorena's troubled older brother, Tony, picks her up at the Stallworth mansion late one night, he and Marcus exchange tense words--an encounter that draws the Saenz family into the dark heart of America's criminal justice system. To uncover the truth, Lorena must embark on an unforgiving odyssey into the desert and through the gates of a religious cult in Mexico. As she stalks a fate guided by forces beyond her reckoning, shocking secrets explode into view.

Filled with pathos, humor, and a dash of the zodiac, All the Secrets of the World is a shape-shifting social novel that offers an unflinching vision of the powerful and powerless colliding. This long-awaited book is a propulsive tour de force--the sheer scope, moral complexities, and piercing insights mark a writer at the height of his powers.

Steve Almond is the author of ten books of fiction and nonfiction, including the New York Times bestsellers Candyfreak and Against Football. He teaches Creative Writing at the Neiman Fellowship at Harvard and Wesleyan, as well as Hugo House, Grub Street, and numerous literary conferences. His essays and reviews have been widely published in The New York Times Magazine, The New York Times, The Boston Globe, The Los Angeles Times, GQ, The Wall Street Journal, Poets & Writers, Tin House, and Ploughshares. His journalism has received numerous awards including the top national prize for feature writing from the Society of Professional Journalists. His short stories have been anthologized in The Best American Short Stories, Best American Mysteries, Best American Erotica, and The Pushcart Prize. He serves as a literary correspondent for WBUR and appears on numerous podcasts. He lives in Arlington, Massachusetts.

Interested in joining our in person event on 5/2 with Steve Almond and Jane Roper, but didn't reserve a spot in time? Please register here to add your name to the wait list, and we'll be in touch on Monday with attendance details.

All the Secrets of the World (Hardcover)