Porter Square Books is delighted to host Heidi Pitlor for the paperback launch of Impersonation in our very first in-person event in over a year -- held outdoors in our patio space! Heidi will be interviewed by Tom Perrotta, followed by an opportunity to get your copy of Impersonation signed by Heidi.  *This event will be held outdoors in front of Porter Square Books in our patio space, and seating for the talk will be limited and offered on a first-come, first served basis. If you'd like to reserve a seat in advance, you can do so by placing an order for Impersonation and making a note in the order comments at check out that you'd like us to reserve you seating - we'll be glad to accomodate while seating lasts!* 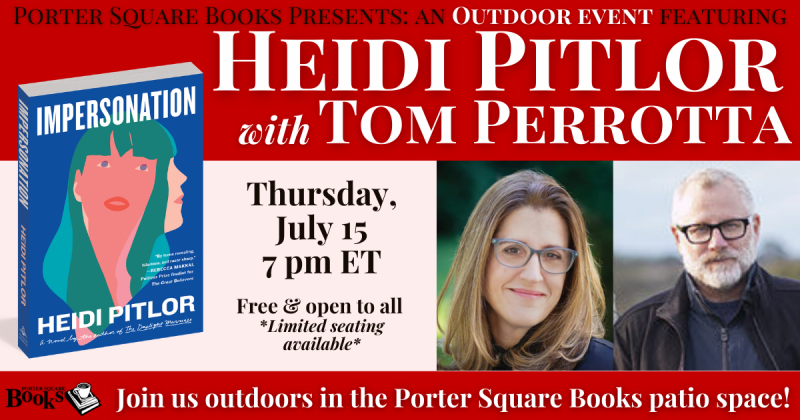 “By turns revealing, hilarious, dishy, and razor-sharp, Impersonation lives in that rarest of sweet spots: the propulsive page-turner for people with high literary standards.” —Rebecca Makkai, author of The Great Believers

Allie Lang is a professional ghostwriter and a perpetually broke single mother to a young boy. Years of navigating her own and America’s cultural definitions of motherhood have left her a lapsed idealist. Lana Breban is a powerhouse lawyer, economist, and advocate for women’s rights with designs on elected office. She also has a son. Lana and her staff have decided she needs help softening her public image and that a memoir about her life as a mother will help.

When Allie lands the job as Lana’s ghostwriter, it seems as if things will finally go Allie’s way. At last, she thinks, there will be enough money not just to pay her bills but to actually buy a house. After years of working as a ghostwriter for other celebrities, Allie believes she knows the drill: she has learned how to inhabit the lives of others and tell their stories better than they can.

But this time, everything becomes more complicated. Allie’s childcare arrangements unravel; she falls behind on her rent; her subject, Lana, is better at critiquing than actually providing material; and Allie’s boyfriend decides to go on a road trip toward self-discovery. But as a writer for hire, Allie has gotten too used to being accommodating. At what point will she speak up for all that she deserves?

A satirical, incisive snapshot of how so many of us now live, Impersonation tells a timely, insightful, and bitingly funny story of ambition, motherhood, and class.

SPECIAL BOOK CLUB OPPORTUNITY! Are you a book club interested in reading Impersonation? Porter Square Books is partnering with Heidi Pitlor and Algonquin Books to offer a special opportunity: order 8 copies (or more) of Impersonation for your book club, and we'll arrange for Heidi to sign your books AND schedule a private Zoom appearance with Heidi to join your bookclub! More details can be found here.

Heidi Pitlor is the author of the novels The Birthdays and The Daylight Marriage. She has been the series editor of The Best American Short Stories since 2007 and the editorial director of Plympton, a literary studio. Her writing has been published in the New York Times, the Boston Globe, the Huffington Post, Ploughshares, and the anthologies It Occurs to Me That I Am America: New Stories and Art and Labor Day: True Birth Stories by Today’s Best Women Writers. She lives outside Boston.

Tom Perrotta is the bestselling author of nine works of fiction, including Election and Little Children, both of which were made into Oscar-nominated films, and The Leftovers, which was adapted into a critically acclaimed, Peabody Award-winning HBO series. His other books include Bad Haircut, The Wishbones, Joe College, The Abstinence Teacher, Nine Inches, and his newest, Mrs. Fletcher. His work has been translated into a multitude of languages. Perrotta grew up in New Jersey and lives outside of Boston.

**In case of inclement weather we will move this event indoors for a signing line only, we appreciate your understanding and have our fingers crossed for clear skies!**