Join Porter Square Books for a virtual panel featuring debut authors Jackie Ess (Darryl), Joss Lake, (Future Feeling), Alex McElroy (The Atmospherians) and Beth Morgan (A Touch of Jen)! These fantastic debut authors will discuss the shared themes of internet and identity in their debut novels. This event is virtual and free to all, hosted on Crowdcast. 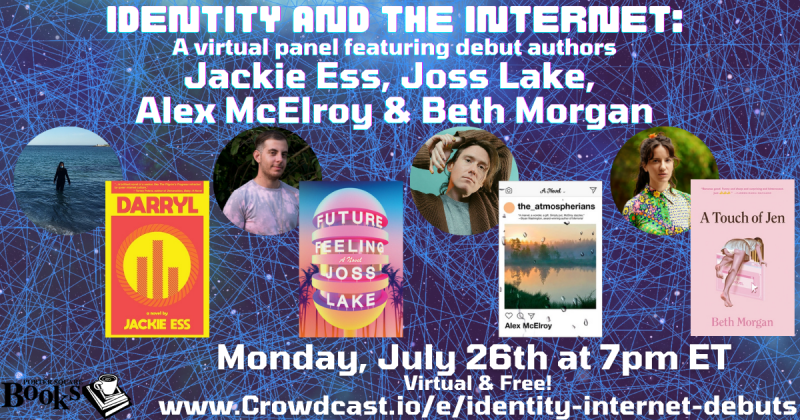 Click here to register to join the event on Crowdcast: https://www.crowdcast.io/e/identity-internet-debuts

Jackie Ess's Darryl is a meditation on, among other things, meditation, marriage, manhood, basketball, sobriety, trans this and that, 70s jazz, Walt Whitman, opera, space rock, and the secret lives of Oregonians. It's also the also the story of one man, Darryl, who awakens in some small way as he explores the cuckolding and swinging lifestyle. It can happen anywhere.

Joss Lake's Future Feeling features an embittered dog walker obsessed with a social media influencer who inadvertently puts a curse on a young man—and must adventure into mysterious dimension in order to save him—in this wildly inventive, delightfully subversive, genre-nonconforming debut novel about illusion, magic, technology, kinship, and the emergent future.

The Atmospherians by Alex McElroy is an “edgy, addictive” (Kirkus Reviews, starred) satire about two best friends who form The Atmosphere—a cult designed to reform problematic men—“a book to be devoured” (Vanity Fair).

Beth Morgan's A Touch of Jen highlights a young couple's toxic Instagram crush as it spins out of control and unleashes a sinister creature in this twisted, viciously funny, "bananas good*" debut (*Carmen Maria Machado).

Jackie Ess is a novelist, the author of Darryl (Clash, 2021), which is her first book, of hopefully many. That's the main thing you ought to know about her for now. You can find other bits of writing here and there, or just visit her on twitter @jackie_ess.

Joss Lake is a trans writer and educator based in New York whose work has been supported by Queens Council of the Arts, Women and Performance Studies Collective, the Watermill Center, and Columbia University. He runs a literary sauna series called Trans at Rest.  His debut novel, Future Feeling, is out from Soft Skull Press.

Alex McElroy's debut novel, The Atmospherians, was published in May by Atria. Other writing appears in The Cut, BuzzFeed, Vulture, GQ, Harper's Bazaar, Vice, The Atlantic, Tin House, and elsewhere. Their chapbook, Daddy Issues, was published in 2017.

Beth Morgan's debut novel, A Touch of Jen, comes out from Little, Brown on July 13th. Her work has been published in The Iowa Review and The Kenyon Review Online.

Click here to register to join the event on Crowdcast: https://www.crowdcast.io/e/identity-internet-debuts

The Atmospherians: A Novel (Hardcover)

A Touch of Jen (Hardcover)