Jim O'Connell, Stories from the Shadows 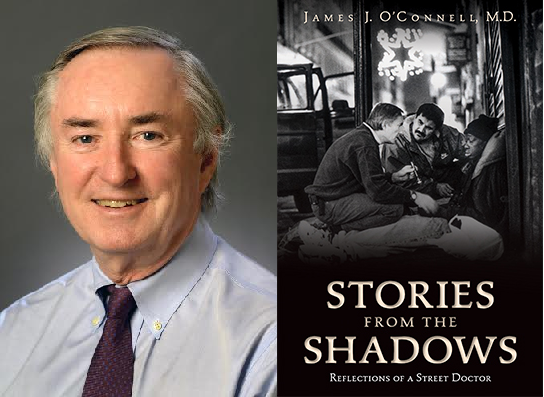 Three decades ago, Jim O’Connell, MD, was fresh out of Harvard Medical School and on his way to a prestigious oncology fellowship at Sloan-Kettering. His mentor, a legendary Boston doctor-humanitarian, asked him to head up a new pilot medical program for the city’s homeless men, women and children— Boston Health Care for the Homeless Program (BHCHP). Dr. O’Connell thought he’d put in a few years, and then get back on track with his “real” career. But along the way, he fell in love with the challenges of homeless medicine, his patients and their stories.

Those stories are now collected in a book by Dr. O’Connell, Stories from the Shadows. As president of BHCHP with an active practice working with “rough sleepers,” (people who live outside), Dr. O’Connell has become an international expert on homeless medicine, helping transform it into a highly respected specialty with a strong research base. His book eloquently and poignantly tells the history of homeless medicine in Boston, largely through the treatment, triumphs and tragedies of some of his most memorable patients.

Jim O’Connell, MD, has a master’s degree in theology from Cambridge University and a medical degree from Harvard Medical School. He is an assistant professor of medicine at Harvard Medical School and the founding physician and president of Boston Health Care for the Homeless Program, which delivers services to more than 12,000 homeless men, women and children at more than 60 shelters and sites. Working with the Massachusetts General Hospital Laboratory of Computer Science, Dr. O’Connell designed and implemented the nation’s first computerized medical record for a homeless program in 1995. He is the editor of The Health Care of Homeless Persons: A Manual of Communicable Diseases in Shelters and on the Streets. His articles have appeared in many journals, including the New England Journal of Medicine, the Journal of the American Medical Association, Circulation, the American Journal of Public Health and the Journal of Clinical Ethics. He has received numerous awards, including the Albert Schweitzer Humanitarian Award in 2012.

Stories from the Shadows: Reflections of a Street Doctor