Porter Square Books is thrilled to partner with Mass Poetry in welcoming Jeffrey Yang and Fanny Howe for a reading and conversation about the poets' latest works! Hear from Line and Light, a multifaceted collection by Jeffrey Yang, whose poetry is “flexible, expansive, sonorously clever” (The Millions), and Indivisible, the conclusion of a radically philosophical and personal series of Fanny Howe novels animated by questions of race, spirituality, childhood, transience, resistance, and poverty.

This event will take place on Tuesday, May 3rd at 7pm at Porter Square Books: Boston Edition (50 Liberty Dr. Boston, MA 02210). Please RSVP below if you plan to attend the in-person event.

Virtual attendance will also be supported- you can register to watch the event live via Crowdcast here! 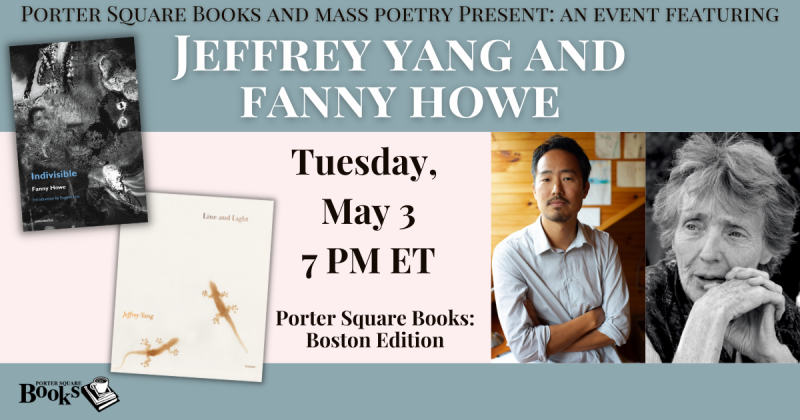 In Jeffrey Yang’s vision for this brilliant new collection, the essence of poetry can be broken down into line and light. Dispersed across these poems are luminous centers, points of a constellation tracing lines of energy through art, myth, and history. These interconnections create vast and dynamic reverberations. As Yang asks in one poem, “What vitality binds a universe?”

One long series explores through shadow and play the ancient Malay kingdom of Langkasuka, a legendary nexus of creativity, commerce, and spiritual life, threatened over time by violence, climate, and environmental degradation. The title poem is a study of time, night turning to dawn, revealing the lines and lights of an art installation on an island in the Hudson River, flowing into another poem about Grand Central Terminal’s atrium of stars, flowing upriver into a poem that describes a cemetery for a state prison. Another extended sequence is a collaboration investigating memory and loss, composed of Yang’s poems, Japanese translations by Hiroaki Sato, and drawings made with ink derived from tea leaves by the artist Kazumi Tanaka. The collection ends with moving elegies for poets, translators, and artists whose works have informed this one. Altogether, Line and Light illuminates the ways that ancestry holds and makes possible the act of making art.

Jeffrey Yang is the author of four poetry collections, including Hey, Marfa, winner of the Southwest Book Award, and An Aquarium, winner of the PEN/Joyce Osterweil Award. He is the translator of Liu Xiaobo’s June Fourth Elegies.

First published by Semiotexte in 2001, Indivisible concludes a radically philosophical and personal series of Fanny Howe novels animated by questions of race, spirituality, childhood, transience, wonder, resistance, and poverty. Depicting the tempestuous multiracial world of artists and activists who lived in working-class Boston during the 1960s, Indivisible begins when its narrator, Henny, locks her husband in a closet so that she might better discuss things with God. On the verge of a religious conversion, Henny attempts to make peace with the dead by telling their stories.

Fanny Howe is the author of more than twenty books of poetry and prose. She has taught literature and writing for many years and is currently Professor Emerita in Literature at the University of California, San Diego. She has mentored a generation of American poets, activists and scholars working at the intersection of experimental and metaphysical forms of thinking.

Interested in joining our in-person event on 5/3 with Jeffrey Yang and Fanny Howe? Please RSVP here to reserve your spot!

-Proof of vaccination must be shown upon arrival at the event (a vaccination card, online vaccination record, or photo of your vaccine card are all fine - please have this handy, as well as a form of ID, as we check you in).

Love and I: Poems (Paperback)