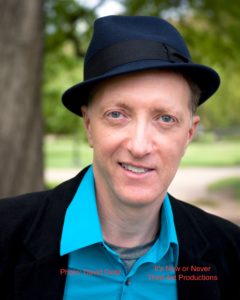 Join local author Judah Leblang for the launch of his new book, Echoes of Jerry!

Growing up in suburban Cleveland, Judah Leblang felt a deep connection with his Uncle Jerry, an orally-educated deaf man who lived an isolated life between the deaf and hearing worlds. Like Jerry, Leblang felt different too, struggling with his sexuality and trying to find his place in society, finally coming out in the mid-1980s. Many years later, after working in the Deaf Community and later, losing much of his own hearing, the author goes on a quest to understand his late uncle and to give him a voice--this man who died of a heart attack at 44, and who remained a mystery to those around him, encased in his silent world.

Judah Leblang is a storyteller, memoirist and writing teacher. His essays and commentaries have been broadcast throughout the US on more than 150 NPR and ABC-network radio stations, as well as several Canadian stations. He is a regular columnist for Bay Windows, Boston’s gay newspaper, and an instructor at Grub Street. The 2nd edition of his memoir, Finding My Place: One Man’s Journey from Cleveland to Boston and Beyond, was published in 2013. Clips of his performances and writing are at www.judahleblang.com.