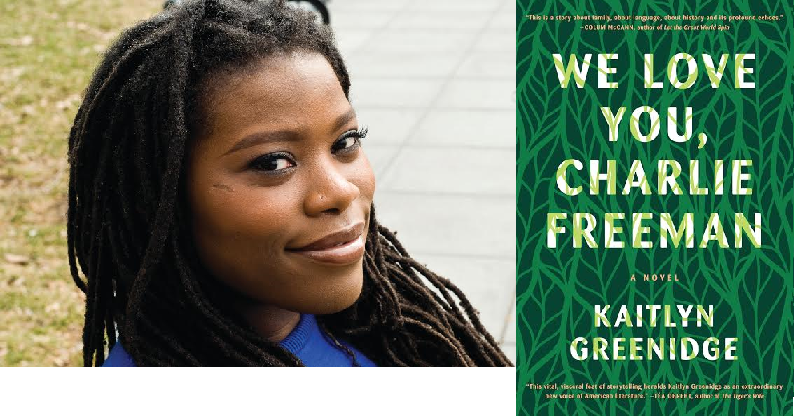 Frustrated by the limitations of cross-race communication in her predominantly white town, Laurel, a young African American girl, teaches herself to sign -- a skill she later imparts to her two daughters. This ability eventually leads Laurel to uproot her husband and daughters from their overeducated and underpaid life in the South End of Boston for the bucolic Massachusetts countryside, where the Freemans are to take part in an experiment. They've been hired by a private research institute to teach sign language to a chimpanzee who will live as part of their family. Narrated primarily by Laurel's teenage daughter, Charlotte, the story goes back in time to the founding of the institute, in the 1920s, revealing shocking past experiments.

"Kaitlyn Greenidge's debut novel reminds us that it is an exciting time to be reading fiction. We Love You, Charlie Freeman is a masterful meditation on race, anthropology, history, and the hurly-burly complications of family. Greenidge's prose is incisive, clever, resounding with a deep intelligence." -- Bill Cheng, author of Southern Cross the Dog

"Disturbing and deeply thoughtful . . . Through various points of views and perspectives we move through a telling of how we come to understand or misunderstand our most intimate human elements within the racialized and gendered culture we live in." -- Tiphanie Yanique, author of Land of Love and Drowning

Kaitlyn Greenidge received her MFA from Hunter College, where she studied with Nathan Englander and Peter Carey, and was Colson Whitehead's writing assistant as part of the Hertog Research Fellowship. Greenidge was the recipient of the Bernard Cohen Short Story Prize. She was a Bread Loaf scholar, a Lower Manhattan Cultural Council Workspace artist-in-residence, and a Johnson State College visiting emerging writer. Her work has appeared in the Believer, the Feminist Wire, At Length, Fortnight Journal, Green Mountains Review, Afrobeat Journal, the Tottenville Review, and American Short Fiction. Originally from Boston, she now lives in Brooklyn.

We Love You, Charlie Freeman: A Novel (Hardcover)