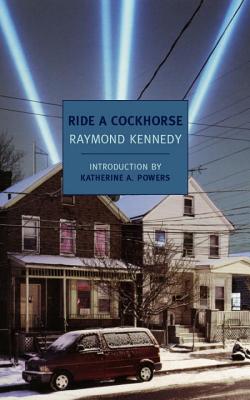 A revolution is under way at a once sleepy New England bank. Forty-five-year-old Frances Fitzgibbons has gone from sweet-tempered loan officer to insatiable force of nature almost overnight. Suddenly she’s brazenly seducing the high-school drum major, taking over her boss’s office, firing anyone who crosses her, inspiring populist fervor, and publicly announcing plans to crush her local rivals en route to dominating the entire banking industry in the northeast. The terrifying new order instituted by Frankie and her offbeat goon squad (led by her devoted hairdresser and including her own son-in-law) is an awesome spectacle to behold.

“Ride a Cockhorse is at once high comedy and a mordant account of the paranoid personality, but this is only part of the elaborate business that Kennedy has undertaken; he has also brought off the improbable if not impossible—a novel about a bank! The best comic novel to come my way in a long time.”
Jonathan Yardley, The Washington Post

Raymond Kennedy (1934–2008) was born and raised in western Massachusetts. In 1982, he joined the creative writing faculty at Columbia University, where he taught until his retirement in 2006.  Kennedy’s other novels include My Father’s Orchard; Goodnight, Jupiter; Columbine; The Flower of the Republic; Lulu Incognito; The Bitterest Age; and The Romance of Eleanor Gray.

Katherine A. Powers’s column on books and writers ran for many years in The Boston Globe and now appears in The Barnes & Noble Review under the title “A Reading Life.” She is the editor of Suitable Accommodations: An Autobiographical Story of Family Life—The Letters of J. F. Powers, 1942–1963, forthcoming in 2013.

David Gordon is a prize-winning journalist (Newsweek, Harvard Education Letter) and book editor (Harvard Education Press), and is now communications director for an education nonprofit.  In 1991, when Ride a Cockhorse was first published, Gordon was Raymond Kennedy's writing student at Columbia University. They became friends, and Kennedy dedicated his final book, The Romance of Eleanor Gray, to him.