Porter Square Books is delighted to welcome Kemi Alabi for Against Heaven, called "a stunning debut from one of our most talented emerging voices". Joined in conversation by poet laureate for the city of Boston Porsha Olayiwola, Alabi will discuss magic, portals, spells, and altered states in their poetry. This event is free and open to all, hosted virtually via Crowdcast on Thursday, April 21 at 7pm. 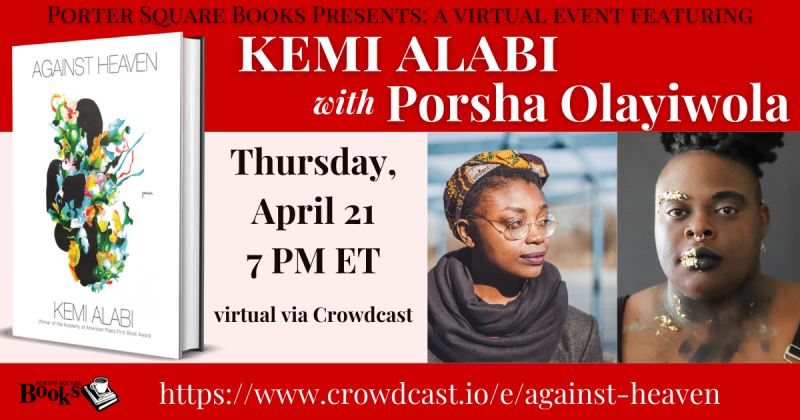 Register to attend the Crowdcast here!

Kemi Alabi’s transcendent debut reimagines the poetic and cultural traditions from which it is born, troubling the waters of some of our country’s central and ordained fictions—those mythic politics of respectability, resilience, and redemption. Instead of turning to a salvation that has been forced upon them, Alabi turns to the body and the earth as sites of paradise defined by the pleasure and possibility of Black, queer fugitivity. Through tender love poems, righteous prayers, and vital provocations, we see the colonizers we carry within ourselves being laid to rest.

Against Heaven is a praise song made for the flames of a burning empire—a freedom dream that shapeshifts into boundless multiplicities for the wounds made in the name of White supremacy and its gods. Alabi has written an astonishing collection of magnificent range, commanding the full spectrum of the Black, queer spirit’s capacity for magic, love, and ferocity in service of healing—the highest power there is.

Kemi Alabi  is the author of  AGAINST HEAVEN  (Graywolf Press, 2022), selected by Claudia Rankine as winner of the 2021 Academy of American Poets First Book Award. Their poems and essays appear in  the   Atlantic ,  Poetry, Boston Review, Catapult, Guernica, them., the BreakBeat Poets Vol. 2, Best New Poets 2019 , and elsewhere. Selected by Chen Chen as winner of the 2020 Beacon Street Poetry Prize, Kemi has received Pushcart Prize, Best of the Net and Brittle Paper Award nominations along with support from MacDowell, Civitella Ranieri, Tin House and Pink Door.

Black, futurist, poet, dyke, hip-hop feminist, womanist: Porsha Olayiwola is a native of Chicago who now resides in Boston. Olayiwola is a writer, performer, educator and curator who uses afro-futurism and surrealism to examine historical and current issues in the Black, woman, and queer diasporas. She is an Individual World Poetry Slam Champion and the artistic director at MassLEAP, a literary youth organization. Olayiwola is an MFA Candidate at Emerson College. Porsha Olayiwola is the author of i shimmer sometimes, too forthcoming with Button Poetry and is the current poet laureate for the city of Boston.

I Shimmer Sometimes, Too (Paperback)