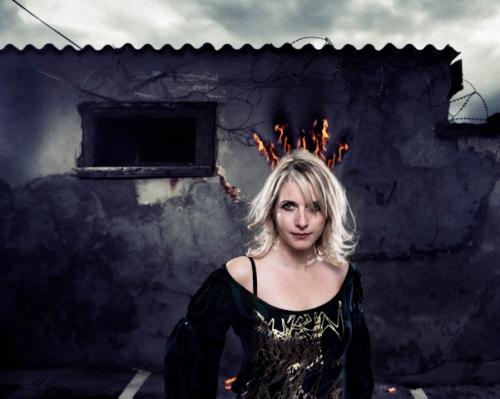 Detective Gabriella Versado has seen a lot of bodies. But this one is unique even by Detroit's standards: half boy, half deer, somehow fused together. As stranger and more disturbing bodies are discovered, how can the city hold on to a reality that is already tearing at its seams?

If you're Detective Versado's geeky teenage daughter, Layla, you commence a dangerous flirtation with a potential predator online. If you're desperate freelance journalist Jonno, you do whatever it takes to get the exclusive on a horrific story. If you're Thomas Keen, known on the street as TK, you'll do what you can to keep your homeless family safe--and find the monster who is possessed by the dream of violently remaking the world.

If Lauren Beukes's internationally bestselling The Shining Girls was a time-jumping thrill ride through the past, her Broken Monsters is a genre-redefining thriller about broken cities, broken dreams, and broken people trying to put themselves back together again.

Lauren Beukes writes novels, comics and screeplays. She's the author of the critically-acclaimed international best-seller, The Shining Girls, about a time traveling serial killer, Zoo City, a phantasmagorical Joburg noir which won the 2011 Arthur C Clarke Award, the neo political thriller, Moxyland. She worked as a journalist and as show runner on one of the South Africa's biggest animated TV shows, directed an award-winning documentary and wrote the New York Times best-selling graphic novel, Fairest: The Hidden Kingdom. She lives in Cape Town, South Africa.

Joe Hill is the author of three novels, Heart-Shaped Box, Horns, and NOS4A2, as well as a prize-winning collection of stories, 20th Century Ghosts. He also wrote a pair of comics: Locke & Key and Wraith (which ties into the world of NOS4A2). Some nice people gave him an Eisner Award for his work in funny books, which is a great honor, even if "funny" probably doesn’t do a good job of describing the kinds of things that happen in the comics.