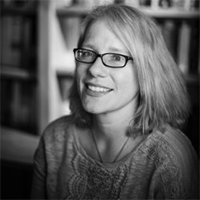 Join local author Lee Gjertsen Malone for the launch of Camp Shady Crook: it’s Ocean’s Eleven set in a summer camp as two kids try to one-up each other in a con competition at a camp that isn’t quite what it seems…

For Archie, the start of summer means another stint at Camp Shady Brook, where there is a lot more to the camp than meets the eye—just like Archie and his now blended family. But thanks to a con Archie developed last year, he’s finally somebody…and he’s not going to lose that status to the new girl, Vivian.

For Vivian, thanks to an incident That Shall Not Be Named or Spoken Of, her summer of exotic travels with Mom and Dad has turned into traveling to a dump of a summer camp in the middle of nowhere.

But thanks to perfect timing, Vivian soon finds herself in a ring of kids trying to out-con each other—and discovers Camp Shady Brook is more like Camp Shady Crook. And when one final, massive con could cost Vivian the first friends she’s had in a while, can she and Archie figure out a way to make things right?

Lee Gjertsen Malone is a Massachusetts transplant via Long Island, Brooklyn, and Ithaca, New York. As a journalist she’s written about everything from wedding planning to the banking crisis to how to build your own homemade camera satellite. Her interests include amateur cheese making, traveling, associating with animals, shushing people in movie theaters, kickboxing, and blinking very rapidly for no reason. She lives in Cambridge, Massachusetts, with her husband, daughter, and a rotating cast of pets.