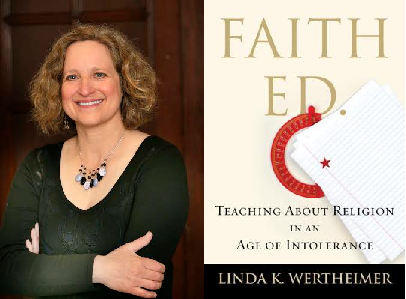 A look at the debate over religion in public schools—and how to best teach children religious literacy and tolerance.

Veteran education journalist Linda K. Wertheimer has traveled the nation listening to all sides of the controversy surrounding the teaching of religion in public schools, interviewing clergy, teachers, children, and parents who are Muslim, Jewish, Christian, Sikh, and atheist.

In Lumberton, Texas, a hundred people filled a school board meeting to protest a teacher’s dress-up exercise in which a girl was allowed to try on a burka during a lesson on Islam. In Tampa, the head of a Muslim civil rights group spoke to high school history classes about Islam, sparking debate about which guest speakers are appropriate. In Wichita, a Messianic Jewish family's opposition to an elementary school’s display about Islam led to such upheaval that the school hired extra security. But in Modesto, the heart of California’s Bible Belt, teachers have avoided problems since 2000, when the district began requiring high school freshmen to take a world religions course. Students learn to fight for their rights and those of religious minorities who once seemed alien.

Linda K. Wertheimer is the author of Faith Ed, Teaching About Religion In An Age of Intolerance (Beacon Press, August 2015). A veteran journalist, she is the former education editor of The Boston Globe. She was a 2014 finalist in the Massachusetts Cultural Council artist fellowship awards for an excerpt from Faith Ed. She teaches writing at Grub Street in Boston and also has taught journalism part-time at Boston University. She lives in the Boston area with her husband and son.

Faith Ed: Teaching About Religion in an Age of Intolerance (Hardcover)