Michael Tougias and Alison O'Leary, So Close to Home 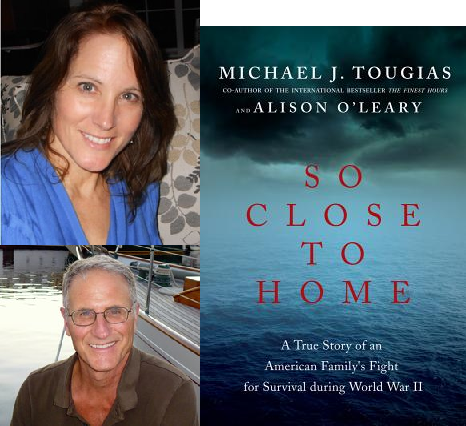 On May 19, 1942 a U-boat in the Gulf of Mexico stalked its prey fifty miles away from New Orleans. Captained by 29-year-old Iron Cross and King's Cross recipient Erich Wurdemann, the submarine set its sights on the freighter Heredia with fifty-nine souls onboard. Most of the crew were merchant seamen, but there were also a handful of civilians, including the Downs family, consisting of the parents, Ray Sr. and Ina, along with their two children, eight-year-old Ray Jr., nicknamed Sonny, and eleven-year-old Lucille. Fast asleep in their berths, the Downs family had no notice that two torpedoes were heading their way. When the ship exploded, Ina and Lucille became separated from Ray Sr. and Sonny.

An inspiring historical narrative, So Close to Home tells the story of the Downs family as they struggle against sharks, hypothermia, drowning, and dehydration in their effort to survive the aftermath of this deadly attack off the American coast.

Michael J. Tougias is the author and coauthor of more than a dozen books, including two bestselling true-adventure and survival books, Ten Hours Until Dawn: A True Story of Heroism and Tragedy Aboard the Can Do and Fatal Forecast: An Incredible True Tale of Disaster and Survival at Sea.

Alison O'Leary is a former reporter for the Boston Globe, a magazine editor, and a freelance writer. Her work has appeared in publications across the country.

So Close to Home: A True Story of an American Family's Fight for Survival During World War II (Hardcover)