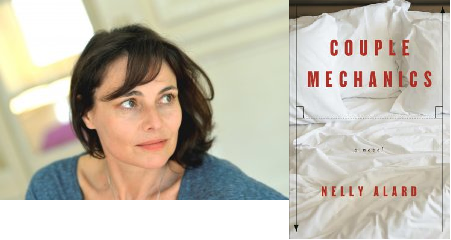 At once sexy and feminist, this is a story of a woman who decides to fight for her marriage after her husband confesses to an affair with a notable politician.

Juliette, a computer engineer, and Olivier, a journalist, have two young children and the busy lives of a modern Parisian couple. On a beautiful spring day, while sitting by the river watching her children play, Juliette's cell phone rings. It is her husband. When Olivier confesses to having an affair, Juliette's world is shattered.

How do you survive betrayal? Can a couple ever be united again? What lengths would you go to in order to save your marriage? These are the questions that this novel, with great intelligence, honesty, and humor, tries to answer. In its acute depiction of intimacy, Couple Mechanics exposes the system of forces at work in a marriage, the effects of the inevitable ebb and flow of desire, and the difficulty of being a man today.

Nelly Alard is an actress and screenwriter who lives in Paris. Her first novel, Le crieur de nuit, received the 2010 Roger Nimier Prize as well as the 2011 Prix National Lions de Littérature and the Simone and Cino Del Duca Foundation Prize for the Support of Literature. In 2013 she was awarded the Prix Interallié for Couple Mechanics, the first woman to win the award in more than twenty years.

Courtney Maum, author of the debut novel I Am Having So Much Fun Here Without You, graduated from Brown University with a degree in comparative literature. She then lived in France for five years where she worked as a party promoter for Corona Extra, which had everything to do with getting a visa, and nothing to do with her degree. Today, Maum splits her time between the Berkshires, New York City, and Paris, working as a creative brand strategist, corporate namer, and humor columnist.

I Am Having So Much Fun Here Without You: A Novel (Paperback)