Porter Square Books is delighted to host Crystal Maldonado in celebration of the release of her latest, No Filter and Other Lies, already honored as a Junior Library Guild Gold Standard Selection! In a starred review, Publishers Weekly wrote, “Maldonado (Fat Chance, Charlie Vega) once again displays her gift for portraying complex family dynamics and layered interiority in this bighearted sophomore novel…. Maldonado’s writing has a warm and relatable feel, full of insight regarding societal expectations, accountability, and the need to belong within one’s own family and the wider world.” Crystal will be joined in conversation with Jennifer de Leon and will be signing books following the talk.

This event is presumed in-person at our Boston location and will be ticketed. Tickets can be used towards the purchase of one of Crystal's three recently released titles on sale at the event- No Filter and Other Lies, Fat Chance, Charlie Vega, and Charlie Vega tien un problema gordo. 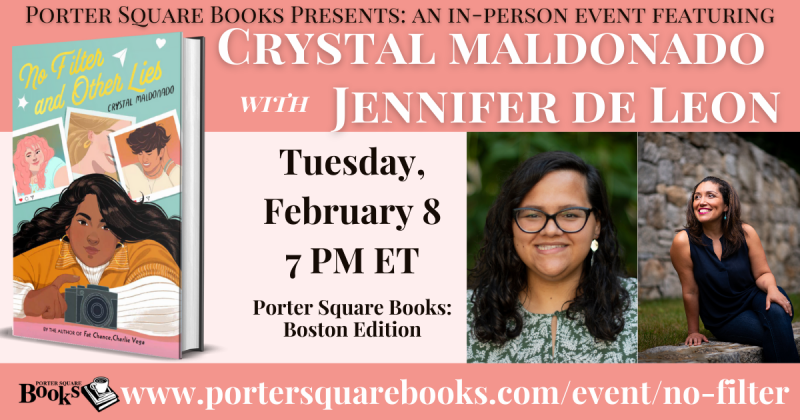 You should know, right now, that I’m a liar.

Twenty one-year-old Max Monroe has it all: beauty, friends, and a glittering life filled with adventure. With tons of followers on Instagram, her picture-perfect existence seems eminently enviable.

Except it’s all fake.

Max is actually 16-year-old Kat Sanchez, a quiet and sarcastic teenager living in drab Bakersfield, California. Nothing glamorous in her existence—just sprawl, bad house parties, a crap school year, and the awkwardness of dealing with her best friend Hari’s unrequited love.

But while Kat’s life is far from perfect, she thrives as Max: doling out advice, sharing beautiful photos, networking with famous influencers, even making a real friend in a follower named Elena. The closer Elena and “Max” get—texting, Snapping, and even calling—the more Kat feels she has to keep up the façade.

But when one of Max’s posts goes ultra-viral and gets back to the very person she’s been stealing photos from, her entire world – real and fake — comes crashing down around her. She has to figure out a way to get herself out of the huge web of lies she’s created without hurting the people she loves.

Crystal Maldonado is a young adult author with a lot of feelings. Her debut novel, Fat Chance, Charlie Vega, is a New England Book Award winner, a Cosmopolitan Best New Book, and a POPSUGAR Best New YA Novel. Her next novel, No Filter and Other Lies, explores teenage life in the social media age—and the lies we tell to ourselves and others. By day, Crystal works in higher ed marketing, and by night, is a writer who loves Beyoncé, shopping, spending too much time on her phone, and being extra. Her work has also been published in Latina, BuzzFeed, and the Hartford Courant. She lives in western Massachusetts with her husband, daughter, and dog. Find her everywhere @crystalwrote or CrystalWrote.com.

Jennifer De Leon is author of the YA novel Don’t Ask Me Where I’m From (Simon & Schuster) which was chosen as a Junior Library Guild selection, and the essay collection White Space: Essays on Culture, Race, & Writing (UMass Press), which is a recipient of the Juniper Prize in Creative Nonfiction. She is also the editor of Wise Latinas: Writers on Higher Education (University of Nebraska Press), an anthology that won an International Latino Book Award. An Assistant Professor of Creative Writing at Framingham State University and faculty member in the MFA in Program at Bay Path University, she has published prose in over a dozen literary journals including Ploughshares, Iowa Review, Michigan Quarterly Review, and more. Jenn makes her home outside the Boston area with her husband and two sons. Her next YA novel, Borderless, is forthcoming in August, 2022. Also on the way are two children’s picture books—So Many Gifts, and a biography of Nobel Peace Prize winner, Rigoberta Menchú. Connect with her @jdeleonwriter on Instagram and Twitter or at her website: www.jenniferdeleonauthor.com

No Filter and Other Lies (Hardcover)