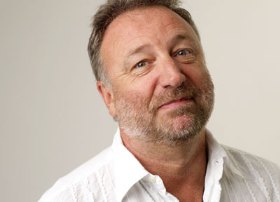 Due to the impending blizzard, this event is canceled. We apologize for any inconvenience and hope to have signed copies of Unknown Pleasures available soon.

“The most colorful and intimate account of Joy Division ever written . . . Hook evokes the spirit of the age with a bluff authenticity that no outsider could hope to emulate…explaining the creation of his band’s remarkable music with all the passion and insight it deserves.”
Keith Cameron, MOJO

“Unflinchingly honest . . . Hook peels away the romantic sheen colored by its dark history and gives unfettered insight into the band’s origins and inspirations . . . this is required reading for anyone who ever felt moved by Joy Division’s cold, dark music.”
Kirkus Reviews (starred review)

In Unknown Pleasures: Inside Joy Division, Peter Hook, bassist for the legendary, groundbreaking band Joy Division, takes readers backstage with the group that helped define the sound of a generation and influenced artists such as U2, Radiohead, and the Red Hot Chili Peppers.

Unlike other books about Joy Division, Factory Records, or lead singer Ian Curtis—who took his own life just before the band's first U.S. Tour—Unknown Pleasures tells Joy Division's story from the unique perspective of one of the three surviving band members.

Told with surprising humor and vivid detail, Unknown Pleasures is the book Joy Division fans have been waiting for.

Peter Hook will be in conversation with NPR Critic and author Tim Riley.

There will be no audio or video recording at this event. Thank you.

Peter Hook was born in 1956 in Salford, England. A founding member of Joy Division and New Order, he is an international DJ and tours Joy Division's music with his new band, the Light. He lives in Cheshire.

NPR critic Tim Riley has authored four previous books about popular music, including the influential Tell Me Why: A Beatles Commentary. He reviews pop and classical music for WBUR-FM’s Here and Now, and has written for The Washington Post, Slate, Salon, The Huffington Post, and many other publications. He was the founder and editor-in-chief of Millennium Pop, an early Web journal devoted to serious commentary about popular culture. Trained as a classical pianist at Oberlin and Eastman, he lectures widely on censorship and the arts, rock history, the British Invasion, and rock criticism. Online, Riley edits the music metaportal the rileyrockindex.com, and blogs at artsjournal.com/riley. He is a professor of journalism at Emerson College in Boston and lives in Concord, Massachusetts, with his wife and two sons.