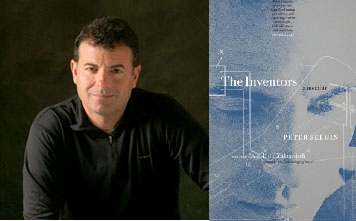 Fall, 1970. At the start of eighth grade, Peter Selgin fell in love with the young teacher who'd arrived from Oxford in Frye boots, with long hair, and a passion for his students that was intense and unorthodox. The son of an emotionally remote inventor, Peter was also a twin with a burning need to feel unique.

The teacher supplied that need. They spent hours in the teacher's cottage, discussing books, playing chess, drinking tea, and wrestling. They were inseparable, until the teacher resigned. Over the next decade they met occasionally and corresponded constantly, their last meeting a disaster. Only after he died did Peter learn that the teacher had completely fabricated his past.

As for Peter's father, the British-accented genius inventor, he turned out to be the son of prominent Italian Jews. Paul Selgin and the teacher were both self-inventors, enigmatic men whose lies and denials betrayed the boy who idolized them.

The Inventors is the story of how these men shaped the author's journey to manhood, a story of promises fulfilled and broken as he uncovers the truth about both men, and about himself.
For like themlike all of us Peter Selgin, too, is his own inventor.

Peter Selgin is the author of Drowning Lessons, winner of the 2007 Flannery O’Connor Award for Fiction, Life Goes to the Movies, a novel, two books on the craft of fiction, and two children’s books. His memoir in essays, Confessions of a Left-Handed Man: An Artist’s Memoir, was short-listed for the William Saroyan International Prize for Writing. His novel, The Water Master, won the Pirate’s Alley William Faulkner Society Prize.

The Inventors: A Memoir (Paperback)