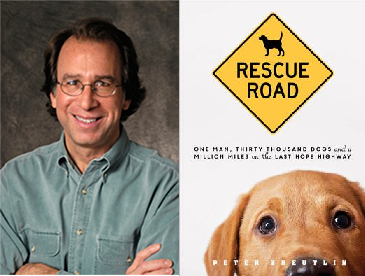 How far would you go to save a dog's life?

The extraordinary story of one man who has driven more than 1 million miles to rescue thousands of dogs from hunger, abuse and neglect and give them a second chance at life and love.

For years, Greg Mahle struggled to keep the last of his family-run restaurants afloat in Ohio. When it finally closed, he was broke and unsure what to do next. Then a stranded van-load of puppies changed his life forever.

Join journalist Peter Zheutlin as he travels with Greg from Ohio to the Gulf Coast on his Rescue Road Trips to bring hard-luck dogs from the deep South to loving "forever families" up north, with the help of many selfless volunteers along the way. From Houston's impoverished Fifth Ward--where thousands of strays roam the streets--and high-kill shelters in Louisiana, to joyous scenes of adopters embracing their new pups in the Northeast, Rescue Road is full of heart: an inspiring story about the unique bond between dogs and humans, and how going the extra mile can make a life-changing difference for these loyal canines--and for us all.

Peter Zheutlin is a freelance journalist and author whose work has appeared regularly in the Boston Globe and the Christian Science Monitor. He has also written for The Los Angeles Times, Parade Magazine, AARP Magazine, and numerous other publications in the U.S. and abroad. He is the author of Around the World on Two Wheels: Annie Londonderry’s Extraordinary Ride (Citadel Press, 2007) and the co-author, with Thomas B. Graboys, M.D., of Life in the Balance: A Physician’s Memoir of Life, Love and Loss with Parkinson’s Disease and Dementia (Union Square Press, 2008), with Robert P. Smith, of Riches Among the Ruins: Adventures in the Dark Corners of the Global Economy (Amacom, 2009), and, with Judith Gelman, of The Unofficial Mad Men Cookbook: Inside the Kitchens, Bars and Restaurants of Mad Men (SmartPop/BenBella Books, 2011) and The Unofficial Girls Guide to New York: Inside the Cafes, Clubs, and Neighborhoods of HBO’s Girls (SmartPop/BenBella, 2013). Prior to starting his writing career, Mr. Zheutlin practiced law and taught legal skills at the University of Virginia and Northwestern University law schools. Mr. Zheutlin is a graduate of Amherst College and Boston College Law School and resides in Massachusetts with his wife, author Judith Gelman, and Albie and Salina. They also have two grown sons.