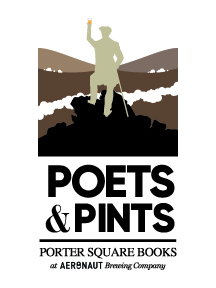 Join Porter Square Books at Aeronaut brewery for a celebration of local poetry.

The greater Somerville and Cambridge area is lucky to have such a vibrant poetry community. So, we will gather at the community space at Aeronaut on the Duck Village stage, to celebrate that community with readings by three local poets.

The poets reading on April 17 are

Sara Mae is a bookseller in Jamaica Plain and an executive director of the Feminine Empowerment Movement Slam (FEMS) Organization. She is the winner of the 2018 Peach Mag Bronze Prize. She believes in the magic of blue bicycles and orange lipstick. She hopes you think her bangs are not too long.

Lip Manegio is a trans, queer nonbinary poet based in Boston where they are working towards a BFA in creative writing at Emerson College. Their favorite pastimes include smiling at dogs they pass on the street and crying to My Chemical Romance on public transit. They represented Emerson at CUPSI 2018 in Philadelphia, appeared on finals stages at FEMS 2018 and Capturing Fire International Queer Poetry Slam & Summit 2018, and were a member of the winning team at the 2018 Vox Pop Poetry Tournament. Their work has appeared in or is forthcoming from Flypaper Magazine, Crab Fat Magazine, the minnesota review, Tin House, and elsewhere.

Muggs Fogarty is a queer writer, performer, and vocalist local to Providence, Rhode Island. Muggs has represented Providence in national poetry slam competition eight times respectively and is a 2017 FEMS Slam champion, a National Poetry Slam semi-finalist, and a Brave New Voices champion. Muggs has been a co-director of award-winning Providence Poetry Slam and ProvSlam Youth since 2014, and has coached several youth and collegiate level slam teams, particularly through UCONN, Brown University, and RISD. Muggs has also worked as an arts mentor with local organizations such as New Urban Arts, CityArts, and PASA, and has received awards from the Rhode Island State Council on The Arts. Muggs is the author of Unburn (Ghost Hum Arts 2016) and can also be found fronting the local darkpop band, Lookers, as well as their own solo loop pedal project, Sweetpea Pumpkin. Muggs is a resident at the non-profit community arts space, AS220, and also practices bodywork as an LMT in Providence.

All three poets are published by the local, small press Game Over Books. ]