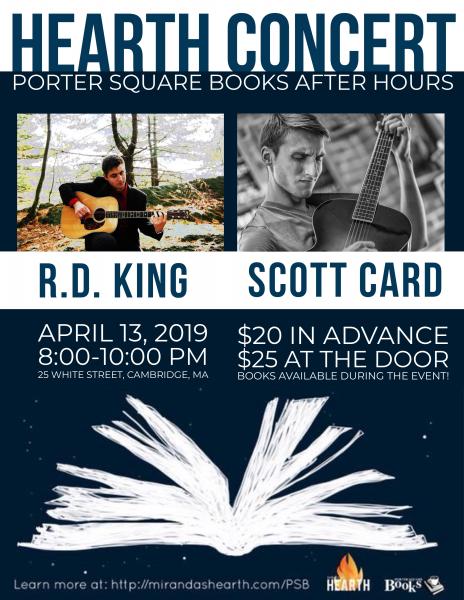 Porter Square After Hours is back, and this time, we’re spotlighting up-and-coming musicians through a new Hearth Concert series.

Listen to local music in the safe embrace of your local, independent bookstore from 8:00-10:00 pm on Saturday, April 13 during the Hearth Concert @ Porter Square Books After Hours!

RD King is a Boston-based human, composer, and acoustic guitar extraordinaire. The winner of the 2017 Canadian Guitar Festival's International Fingerstyle Guitar Competition, he has opened for Andy McKee, Ari Hest, Liz Longley, and many others. Using only instrumental music, he creates compelling narratives and emotional experiences. Through composing and performing, King explores life, consciousness, and meaning, grappling with questions of individual and shared experience. Listening to King’s music is an emotional and introspective journey that is difficult to parse into genre or tradition. His debut album, vs. Self, was released on April 27, 2017 and is available on iTunes, Spotify, and more.

There is a common truth in all music, and Scott Card is finding that thread. From childhood memories of dancing to Jay Geils Band and REM in the living room to releasing his first collaborative full-length album at age 18, music has always been about bringing people together to express something about the human experience. Scott is a long-time teacher and student of music. After graduating from Ithaca College in 2013 with a degree in Jazz Studies and living abroad, Scott released "Dessin," a collection of pieces for solo guitar, in 2016. Combining the visceral expressive power of jazz with the conceptual precision of classical music, along with the relatable idioms of folk and pop, Scott is finding his own musical voice that has been described by his audiences as “incredible,” “intense,” and “the real thing.”