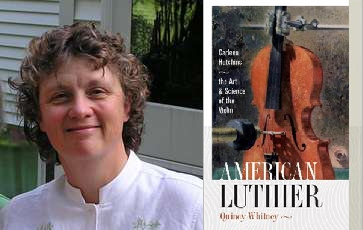 From the time of Stradivari, the mysterious craft of violinmaking has been a closely guarded, lucrative, and entirely masculine preserve. In the 1950s Carleen Maley Hutchins was a grade school science teacher, amateur trumpet player, and New Jersey housewife. When musical friends asked her to trade a trumpet for a $75 viola, she decided to try making one, thus setting in motion a surprising career. A self-taught genius who went head to head with a closed and ancient guild, Hutchins carved nearly 500 stringed instruments over the course of half a century and collaborated on more than 100 experiments in violin acoustics. In answer to a challenge from a composer, she built the first violin octet: a family of eight violins ranging in size from an eleven-inch treble to a seven-foot contrabass, and in register across the gamut of the piano keyboard. She wrote more than 100 technical papers, including two benchmark Scientific American cover articles, founded an international society devoted to violin acoustics, and became the only American and the only woman to be honored in Cremona, Italy, the birthplace of Stradivari.

Hutchins died in 2009 at the age of ninety-eight. The most innovative violinmaker of the modern age, she set out to explore two worlds she knew virtually nothing about violins and acoustical physics. American Luthier chronicles the life of this unsung woman who altered everything in a world that had changed little in three centuries.