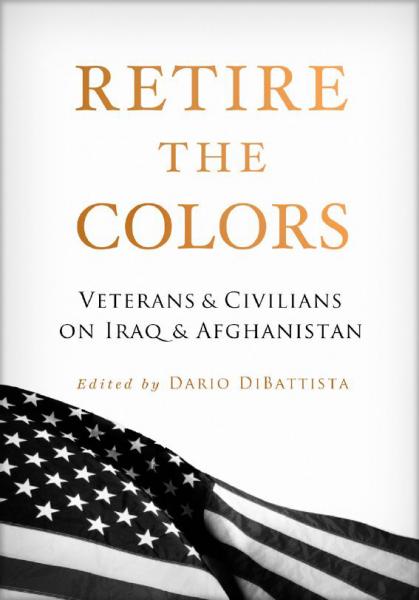 Join some of the contributors to a new anthology exploring the aftereffects of war.

The impact of war, and the lingering aftereffect it has on both veterans and civilians, is—for myriad reasons—largely invisible to the public. Popular media may create news cycles around horrors or stereotypes, but the effort required to redefine and sustain “normal” lives after war stays below the surface and out of sight.

In Retire the Colors, nineteen thought-provoking stories by veterans and civilians consider the residual effects of Iraq and Afghanistan. A pacifist describes her decision to accompany her husband, an Iraq veteran, to the shooting range. A hospital worker in Mosul talks about what happens on a hunting trip back home with his grandfather. A veteran experiences the 2013 Boston marathon. The wife of a combat medic considers their unusual nighttime routines. A mother and former 50 cal gunner navigates truth and lies with her children.

These stories offer a grace uncommon in war literature today. They also make an appeal to readers: to witness with compassion the men and women who—because of war—possess the strength to show us what it means to be fully human.

By Dario DiBattista (Editor), Brian Castner (Contribution by), David Chrisinger (Contribution by)
Not Available
ISBN: 9781944079079
Availability: Available to Order from Supplier: Arrives at Store in a Week(ish)
Because of how it is sold to us we cannot accept a return of this title.
Published: Hudson Whitman/ Excelsior College Press - October 26th, 2016