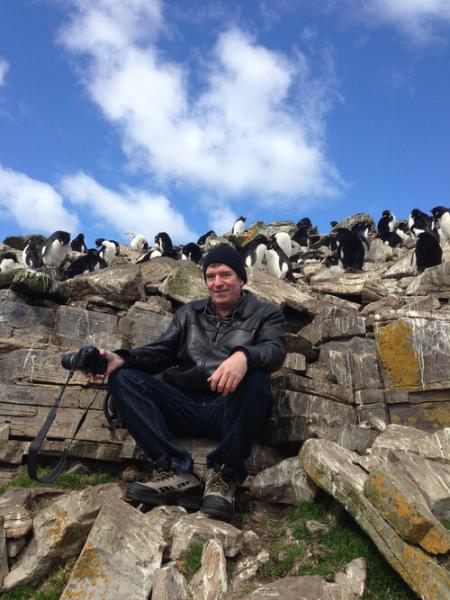 *Due to COVID-19 and state non-essential closures, all April events have been canceled. We hope to reschedule as many as possible! Please support the author by picking up all April events books for 20% off this month, shipped directly to your home. We can't wait to welcome you back for resumed programming when it's safe to do so.*

"Quite possibly the most original travel book published in years."—Jeff Sharlet, author of This Brilliant Darkness and The Family.

In Borderline Citizen Robin Hemley wrestles with what it means to be a citizen of the world, taking readers on a singular journey through the hinterlands of national identity. As a polygamist of place, Hemley celebrates Guy Fawkes Day in the contested Falkland Islands; Canada Day and the Fourth of July in the tiny U.S. exclave of Point Roberts, Washington; Russian Federation Day in the Russian exclave of Kaliningrad; Handover Day among protesters in Hong Kong; and India Day along the most complicated border in the world.

Forgoing the exotic descriptions of faraway lands common in traditional travel writing, Borderline Citizen upends the genre with darkly humorous and deeply compassionate glimpses into the lives of exiles, nationalists, refugees, and others. Hemley’s superbly rendered narratives detail these individuals, including a Chinese billionaire who could live anywhere but has chosen to situate his ornate mansion in the middle of his impoverished ancestral village, a black nationalist wanted on thirty-two outstanding FBI warrants exiled in Cuba, and an Afghan refugee whose intentionally altered birth date makes him more easy to deport despite his harrowing past.

Part travelogue, part memoir, part reportage, Borderline Citizen redefines notions of nationhood through an exploration of the arbitrariness of boundaries and what it means to belong.

Robin Hemley is the author of numerous books, including Invented Eden; Reply All: Stories; A Field Guide for Immersion Writing; Nola; Turning Life into Fiction; and Do-Over! He has won many awards for his writing, including a Guggenheim Fellowship and three Pushcart Prizes, as well as residencies at the Rockefeller Foundation’s Bellagio Center, the Bogliasco Foundation, the Fine Arts Work in Provincetown, the MacDowell Colony, and others.

Jerald Walker is the author of The World in Flames: A Black Boyhood in a White Supremacist Doomsday Cult, and Street Shadows: A Memoir of Race, Rebellion, and Redemption, winner of the PEN New England Award for Nonfiction. His work has appeared in a variety of magazines and he has been widely anthologized, including four times in The Best American Essays series. Recipient of fellowships from the National Endowment for the Arts and the James A. Michener Foundation, Jerald is a professor of creative writing at Emerson College. His next book, How to Make a Slave and Other Essays, will be published in the fall.