Rosa DeLauro, The Least Among Us 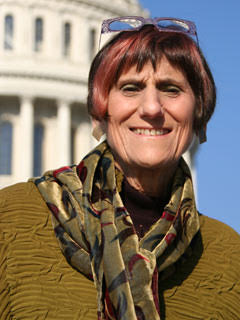 Cynical politicians like Paul Ryan and Donald Trump argue that the people of the United States would be better off without food stamps, Obamacare, and workplace protections. Congresswoman Rosa L. DeLauro knows these folks are just plain wrong.

Growing up in New Haven, Connecticut, DeLauro saw firsthand how vulnerable hard-working people are in the face of corporate indifference and government neglect. From fatal industrial fires to devastating childhood poverty, DeLauro witnessed it all--and emerged convinced that social programs are worth going to the mat for, again and again. Worker protections, Social Security, unemployment insurance, Medicare, Medicaid, food stamps, and housing assistance lift up all Americans; they fulfill this country's promise of opportunity for everyone, and are essential for our country's health.

For twenty-five years, DeLauro has been fighting for everyday Americans, earning a reputation as the most impassioned defender of our social safety net. The Least Among Us tells the story of a quarter century of deal-making on behalf of people too often overlooked, told by a woman as fearless as she is opinionated. Part House of Cards, part progressive manifesto, The Least Among Us shares lessons about power--how it's gained and how to wield it for everyone's benefit.

Rosa L. DeLauro is the Congresswoman from Connecticut s Third District and has served since 1991. DeLauro is a member of the House Democratic leadership and co-chair of the Steering and Policy Committee. She is the ranking member on the Labor, Health, Human Services, and Education Appropriations Subcommittee, and serves on the subcommittee responsible for FDA and agriculture, where she oversees drug and food safety. DeLauro lives in New Haven, Connecticut, and this is her first book.

The Least Among Us: Waging the Battle for the Vulnerable (Hardcover)