Porter Square Books is thrilled to support the release of The Lemon by S.E. Boyd! The authors will be celebrating the book launch at the Plough & Stars pub at 4pm on Sunday, November 13.

We'll have copies of the book available for sale at the event. 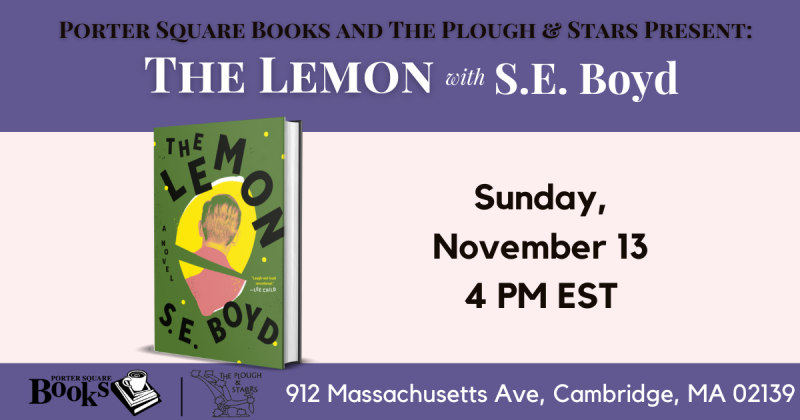 Set in the intersecting worlds of fine dining, Hollywood, and the media, a darkly hilarious and ultimately affecting story about the underside of success and fame, and our ongoing complicity in devouring our cultural heroes.

While filming on location in Belfast, Northern Ireland, John Doe, the universally adored host of the culinary travel show Last Call, is found dead in a hotel room in an apparent suicide. As the news of his untimely demise breaks stateside, a group of friends, fixers, hustlers, and opportunists vie to seize control of the narrative: Doe’s chess-master of an agent Nia, ready to call in every favor she is owed to preserve his legacy; down-on-her-luck journalist Katie, who fabricates a story about Doe to save her job at a failing website; and world-famous chef Paolo Cabrini, Doe’s closest friend and confidant, who finds himself entangled with a deranged Belfast hotel worker whose lurid secret might just take them all down.

Bolstered by the authors' insider knowledge of high-end restaurants and low-end media, The Lemon delivers a raucous examination of our culture with deliciously cutting prose, crackling dialogue, and an unpredictable plot that will keep you riveted to the last page.

S. E. Boyd is the creation of veteran journalists Kevin Alexander and Joe Keohane, and editor Alessandra Lusardi. All lightly damaged Catholics prone to extensive overanalysis, Alexander, Keohane, and Lusardi have between them authored four books, edited dozens more, and written for Esquire, The Atlantic, and The New Yorker, among others. Alexander also won a James Beard Award for food writing, a fact Keohane and Lusardi are both tired of hearing about. This is their first novel.

The Lemon: A Novel (Hardcover)