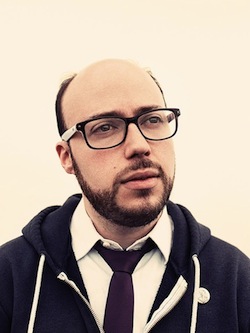 Boston-area theremin player Jon Bernhardt plays the instrument at the heart of Sean Michaels' new novel. Join us for a combination concert and reading!

Locked in a cabin aboard a ship bearing him back to Russia and away from the love of his life, Lev Sergeyvich Termen begins to type his story: a tale of electricity, romance and the invention of the world’s strangest instrument, the theremin. He recollects his early years as a scientist forging breakthroughs during the Bolshevik Revolution and his decade as a Manhattan celebrity and reluctant Soviet spy. Against the backdrop of Prohibition and the 1929 Crash, Termen spends his days in his workshop, devising inventions, and his nights in Harlem clubs, jostling with famous bandleaders and falling in love with the young violinist Clara Reisenberg. When the boat reaches his homeland, Termen finds it is not the Russia he remembers. He is imprisoned in the Gulag system, sent first to a Siberian work camp and then to a secret laboratory. In the face of all this, his love for Clara remains constant, passing through the ether like the theremin’s song.

Sean Michaels is a writer and music critic. A two-time National Magazine Award winner, his work has been published by the Guardian, McSweeney's, the Walrus, Brick, Pitchfork, The Believer, and many other outlets. In 2003, he founded the music-blog Said the Gramophone. He lives in Montreal.

Jon Bernhardt has been playing theremin since 1996 in such bands as The Lothars, The Pee Wee Fist, and UV Protection. As a solo performer, he specializes in theremin versions of songs that are completely inappropriate for that instrument (mostly punk and new wave classics). Although he's been known to throw in a few standards, to keep the audience on their toes. When not playing the theremin, he works as an actuary at a major metropolitan insurance company and DJs an indie-rock radio show at WMBR-FM, M.I.T.'s community radio station. He lives in Somerville with his wife and son.

Us Conductors: A Novel (Paperback)