Join Porter Square Books for a talk with Brian D. McLaren, former pastor and author of Faith After Doubt. McLaren will be joined in conversation by Greg Epstein, Humanist Chaplain at Harvard and MIT, author of Good Without God, a fellow leader on the Biden campaign's faith outreach team, to discuss their substantial political, social, and ethical common ground as well as their theological disagreements. This event is free and open to all, hosted on Crowdcast. 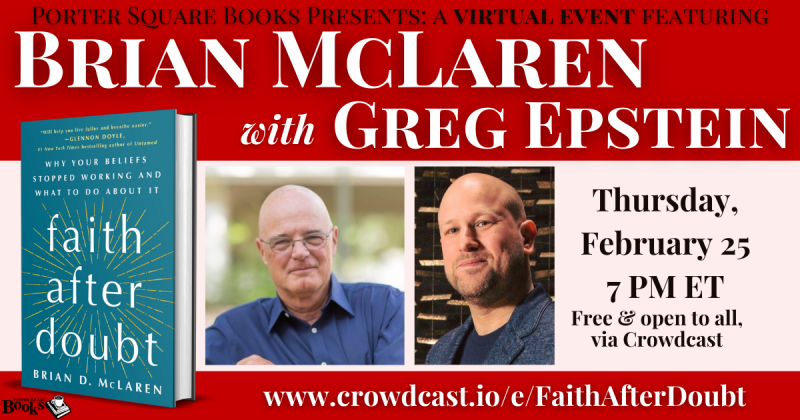 Register to join the event on Crowdcast here: https://www.crowdcast.io/e/faithafterdoubt

From the author of A New Kind of Christianity comes a bold proposal: only doubt can save the world and your faith.

"Will help you live fuller and breathe easier..” —Glennon Doyle

Sixty-five million adults in the U.S. have dropped out of active church attendance and about 2.7 million more are leaving every year. Faith After Doubt is for the millions of people around the world who feel that their faith is falling apart.

Using his own story and the stories of a diverse group of struggling believers, Brian D. McLaren, a former pastor and now an author, speaker, and activist shows how old assumptions are being challenged in nearly every area of human life, not just theology and spirituality. He proposes a four-stage model of faith development in which questions and doubt are not the enemy of faith, but rather a portal to a more mature and fruitful kind of faith. The four stages—Simplicity, Complexity, Perplexity, and Harmony—offer a path forward that can help sincere and thoughtful people leave behind unnecessary baggage and intensify their commitment to what matters most.

A former college English teacher, Brian D. McLaren was a pastor for twenty-four years. Now he’s an author, activist, public theologian, and frequent guest lecturer for gatherings in the U.S. and internationally. His work has been covered in TIME Magazine, Newsweek, USA Today, The New York Times, Washington Post, CNN, and many other media outlets. The author of more than 15 books, including Faith After Doubt and the award-winning A New Kind of Christian, he is a faculty member of The Living School at the Center for Action and Contemplation. McLaren lives in Florida.

Greg M. Epstein serves as the humanist chaplain at Harvard and MIT, and as the Convener for Ethical Life at MIT's Office of Religious, Spiritual, and Ethical Life (ORSEL). Author of the New York Times bestselling book Good Without God: What a Billion Nonreligious People Do Believe, Greg served, in 2020, as national chair of "Humanists for Biden," the first-ever such initiative undertaken by nonreligious Americans in collaboration with the Interfaith outreach efforts of a major U.S. Presidential campaign. He has written about humanist values in politics and society for CNN.com, The Boston Globe, The Washington Post, and Newsweek. Having worked for nearly two decades as a prominent leader for nearly in national efforts to build a positive, inclusive and inspiring humanist community to serve the growing population of atheists, agnostics, and nonreligious people, Greg has been described as a “godfather to the [humanist] movement” by The New York Times Magazine, and as “one of the top faith and moral leaders in the United States” by Faithful Internet, a project coordinated by the United Church of Christ with assistance from the Stanford Law School Center for Internet and Society. He is currently working on a book about religion and human values in a technological world. Follow him on Twitter @gregmepstein.

Register to join the event on Crowdcast here: https://www.crowdcast.io/e/faithafterdoubt

Faith After Doubt: Why Your Beliefs Stopped Working and What to Do About It (Hardcover)

Good Without God: What a Billion Nonreligious People Do Believe (Paperback)