Join Porter Square Books for a virtual talk with Cassandra Khaw for the release of their debut novel, The All-Consuming World - described by Publishers Weekly as "an adventure that doubles as a cathartic scream"! Khaw will be joined in conversation by P. Djèlí Clark (A Master of Djinn). This event is free and open to all, hosted on Crowdcast. 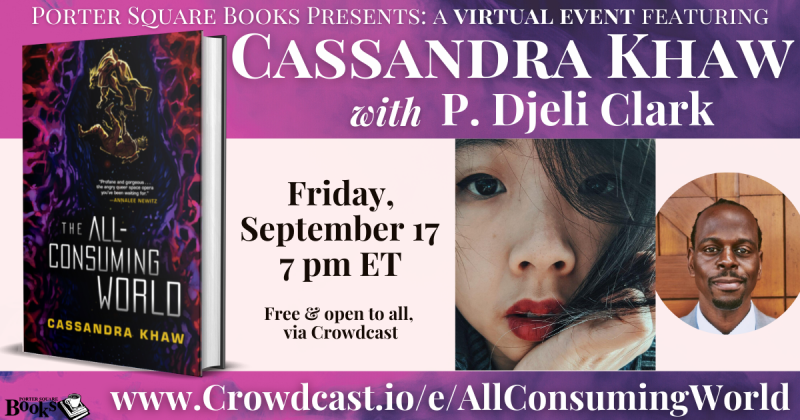 Click here to register for the event on Crowdcast: https://www.crowdcast.io/e/allconsumingworld

Maya has died and been resurrected into countless cyborg bodies through the years of a long, dangerous career with the infamous Dirty Dozen, the most storied crew of criminals in the galaxy, at least before their untimely and gruesome demise. Decades later, she and her diverse team of broken, diminished outlaws must get back together to solve the mystery of their last, disastrous mission and to rescue a missing and much-changed comrade . . . but they’re not the only ones in pursuit of the secret at the heart of the planet Dimmuborgir.

The highly evolved AI of the galaxy have their own agenda and will do whatever it takes to keep humanity from ever regaining control. As Maya and her comrades spiral closer to uncovering the AIs’ vast conspiracy, this band of violent women—half-clone and half-machine—must battle their own traumas and a universe of sapient ageships who want them dead, in order to settle their affairs once and for all.

Welcome to The All-Consuming World, the debut novel of acclaimed writer Cassandra Khaw. With this explosive and introspective exploration of humans and machines, life and death, Khaw takes their rightful place next to such science fiction luminaries as Ann Leckie, Ursula Le Guin, and Kameron Hurley.

CASSANDRA KHAW is an award-winning game writer, and former scriptwriter at Ubisoft Montreal. Khaw's work can be found in places like Fantasy & Science Fiction, Lightspeed, and Tor.com. Khaw's first original novella, Hammers on Bone, was a British Fantasy award and Locus award finalist, and their novella, Nothing But Blackened Teeth, is published by Nightfire.

Phenderson Djéli Clark is the author of the novel A Master of Djinn, and the award-winning and Hugo, Nebula, and Sturgeon nominated author of the novellas Ring Shout, The Black God’s Drums and The Haunting of Tram Car 015. His short stories have appeared in online venues such as Tor.com, Heroic Fantasy Quarterly, Beneath Ceaseless Skies, and in print anthologies including, Griots and Hidden Youth. You can find him on Twitter at @pdjeliclark and his blog The Disgruntled Haradrim.

Click here to register for the event on Crowdcast: https://www.crowdcast.io/e/allconsumingworld

Nothing But Blackened Teeth (Hardcover)