Porter Square Books is thrilled to present a virtual event with staff favorite Catherynne M. Valente for the release of her new novel, Comfort Me With Apples - described as "a a darkly elegant fairytale-horror story that will haunt you in the best ways" (Christopher Golden)!  She will be joined by Maria Dhavana Headley. This event is free and open to all, hosted on Crowdcast. 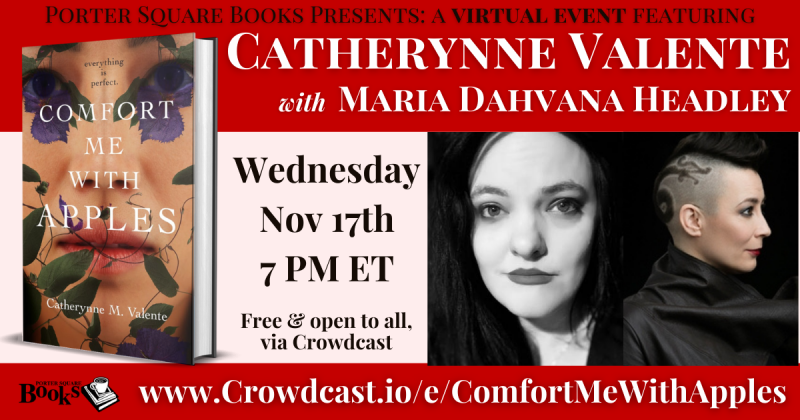 Register to join the event on Crowdcast here: https://www.crowdcast.io/e/comfortmewithapples

Comfort Me With Apples is a terrifying new thriller from bestseller Catherynne M. Valente, for fans of Gone Girl and Spinning Silver.

Sophia was made for him. Her perfect husband. She can feel it in her bones. He is perfect. Their home together in Arcadia Gardens is perfect. Everything is perfect.

It's just that he's away so much. So often. He works so hard. She misses him. And he misses her. He says he does, so it must be true. He is the perfect husband and everything is perfect.

But sometimes Sophia wonders about things. Strange things. Dark things. The look on her husband's face when he comes back from a long business trip. The questions he will not answer. The locked basement she is never allowed to enter. And whenever she asks the neighbors, they can't quite meet her gaze....

But everything is perfect. Isn't it?

Catherynne M. Valente is the New York Times bestselling author of over two dozen works of fiction and poetry, including Palimpsest, the Orphan’s Tales series, Deathless, Radiance, and the crowdfunded phenomenon The Girl Who Circumnavigated Fairyland in a Ship of Her Own Making (and the four books that followed it). She is the winner of the Andre Norton, Tiptree, Sturgeon, Eugie Foster Memorial, Mythopoeic, Rhysling, Lambda, Locus, and Hugo awards, as well as the Prix Imaginales. Valente has also been a finalist for the Nebula and World Fantasy Awards. She lives on an island off the coast of Maine with a small but growing menagerie of beasts, some of which are human.

Maria Dahvana Headley is the New York Times-bestselling, World Fantasy Award-winning author of eight books, most recently BEOWULF: A NEW TRANSLATION (MCD x FSG), which was named as a book of the year by The Atlantic Monthly, NPR, Vox, The Irish Times, and the New Statesman. THE MERE WIFE (MCD x FSG), a contemporary adaptation of Beowulf, was named by the Washington Post as one of its Notable Works of Fiction in 2018. She’s written for both teenagers (MAGONIA and AERIE, HarperCollins) and adults, in a variety of genres and forms. Headley’s short fiction has been shortlisted for the Nebula, and Shirley Jackson Awards and for the 2020 Joyce Carol Oates Prize, and has been anthologized in many year’s bests; a collection is under contract to FSG. Her essays on gender, chronic illness, politics, propaganda, and mythology have been published and covered in The New York Times, The Daily Beast, Harvard’s Nieman Storyboard, and elsewhere. Her work has been supported by The MacDowell Colony, Arte Studio Ginestrelle, and the Sundance Institute’s Theatre Lab, among other organizations. She's taught writing in the master's program at Sarah Lawrence, and delivered masterclasses and writing lectures at Harvard, Stanford, Columbia, UCSD, Oxford University, the University of Iowa, U Penn, Dartmouth, and Northwestern University,  among many others. She grew up in the high desert of Idaho on a survivalist sled dog ranch, where she spent summers plucking the winter coat from her father’s wolf.

Register to join the event on Crowdcast here: https://www.crowdcast.io/e/comfortmewithapples

Comfort Me With Apples (Hardcover)