Porter Square Books is thrilled to present a virtual event with the one and only Dahlia Adler for Home Field Advantage! Sarah Henning will join the author in conversation for this virtual event, taking place on Thursday. June 9 at 6pm ET. Signed books will be available for attendees.

Register for the Crowdcast! 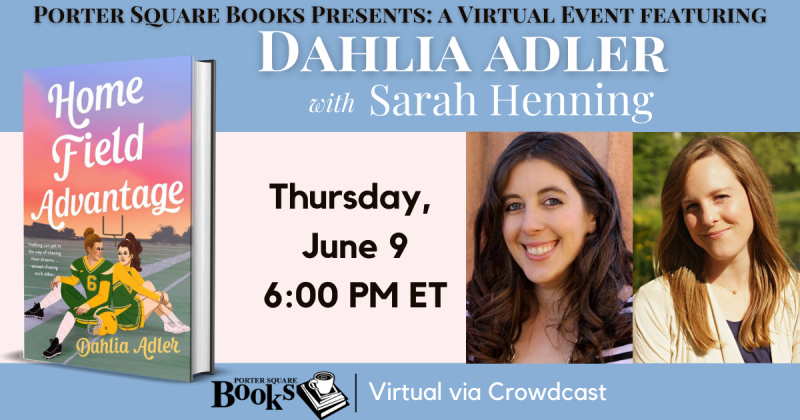 "Home Field Advantage has it all. A swoony romance, characters you will be cheering for from start to finish, and a plot that sucks you in from the very first page. An instant favorite, perfectly capturing the power in being true to yourself and fighting for what is right." - Rachael Lippincott, #1 New York Times bestselling coauthor of Five Feet Apart and She Gets the Girl

Amber McCloud’s dream is to become cheer captain at the end of the year, but it’s an extra-tall order to be joyful and spirited when the quarterback of your team has been killed in a car accident. For both the team and the squad, watching Robbie get replaced by newcomer Jack Walsh is brutal. And when it turns out Jack is actually short for Jaclyn, all hell breaks loose.

The players refuse to be led by a girl, the cheerleaders are mad about the changes to their traditions, and the fact that Robbie’s been not only replaced but outshined by a QB who wears a sports bra has more than a few Atherton Alligators in a rage. Amber tries for some semblance of unity, but it quickly becomes clear that she's only got a future on the squad and with her friends if she helps them take Jack down.

Just one problem: Amber and Jack are falling for each other, and if Amber can't stand up for Jack and figure out how to get everyone to fall in line, her dream may come at the cost of her heart.

Dahlia Adler's Home Field Advantage is a sparkling romance about fighting for what - or who - you truly want.

Dahlia Adler is an editor of mathematics by day, the overlord of LGBTQReads by night, and a Young Adult author at every spare moment in between. She is the editor of several anthologies and the author of many novels, including Cool for the Summer and Home Field Advantage. She lives in New York with her family and an obscene number of books.

Sarah Henning is a recovering journalist who has worked for The Palm Beach Post, Kansas City Star and Associated Press, among others. When not writing, she runs ultramarathons, hits the playground with her two kids and hangs out with her husband Justin, who doubles as her long-suffering IT department. Sarah lives in Lawrence, Kansas, hometown of Langston Hughes, William S. Burroughs and a really good basketball team.

It's All in How You Fall (Paperback)