Join Porter Square Books for a virtual talk with Damian Alexander for the release of his debut graphic novel, Other Boys, "a sweet, touching and at-times scary memoir of grief and loss and coming out (mostly to himself)" (Kirkus, in a starred review). This event is free and open to all, hosted on Crowdcast. 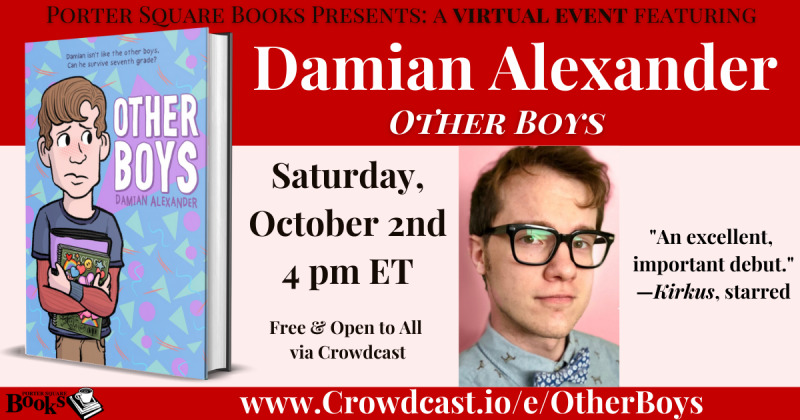 Register for the event on Crowdcast here: https://www.crowdcast.io/e/otherboys

In Other Boys, debut author Damian Alexander delivers a moving middle grade graphic memoir about his struggles with bullying, the death of his mother, and coming out.

“It’s hard to describe Damian Alexander’s particular mix of earnest sweetness and searing honesty without experiencing this book for yourself. Other Boys shoots straight for the heart in every single panel, and I’m both grateful and moved.”—Becky Albertalli, New York Times–bestselling author of Simon vs. the Homo Sapiens Agenda

Damian is the new kid at school, and he has a foolproof plan to avoid the bullying that's plagued him his whole childhood: he's going to stop talking. Starting on the first day seventh grade, he won't utter a word. If he keeps his mouth shut, the bullies will have nothing to tease him about—right?

But Damian's vow of silence doesn't work—his classmates can tell there's something different about him. His family doesn't look like the kind on TV: his mother is dead, his father is gone, and he's being raised by his grandparents in a low-income household. And Damian does things that boys aren't supposed do, like play with Barbies instead of GI Joe. Kids have teased him about this his whole life, especially other boys. But if boys can be so cruel, why does Damian have a crush on one?

Damian Alexander is a cartoonist and storyteller who grew up in and around Boston. His first graphic novel, Other Boys, is based off his viral and award winning autobiographical webcomics. Damian’s illustrations and comic shorts can be found on The Trevor Project, Narratively, The Nib and others. He loves ghost stories, miniatures, and watching cartoons with his cats on sunny afternoons.

Register for the event on Crowdcast here: https://www.crowdcast.io/e/otherboys

“Damian Alexander traces with poignant accuracy the story of boys who find themselves erased at a certain age. This book should be read by queer kids and parents alike.”
—Garrard Conley, New York Times–bestselling author of Boy Erased

“Honest and incredibly brave, this deeply relatable story will resonate with anyone who’s looking for their place in the world. Other Boys is a book I so desperately needed as a teen.”
—Phil Stamper, bestselling author of The Gravity of Us and As Far As You ’ll Take Me

“With Other Boys, Damian Alexander bares his soul for young readers in a way I can only describe as heroic.”
—Adam Sass, author of Surrender Your Sons