Join us for a virtual event with Danielle Dreilinger, author of the new book The Secret History of Home Economics: How Trailblazing Women Harnessed the Power of Home and Changed the Way We Live, in conversation with Ann Hood (Red Thread, The Knitting Circle)! This event is free and open to all, hosted on Crowdcast. Signed bookplates from the author will be available! 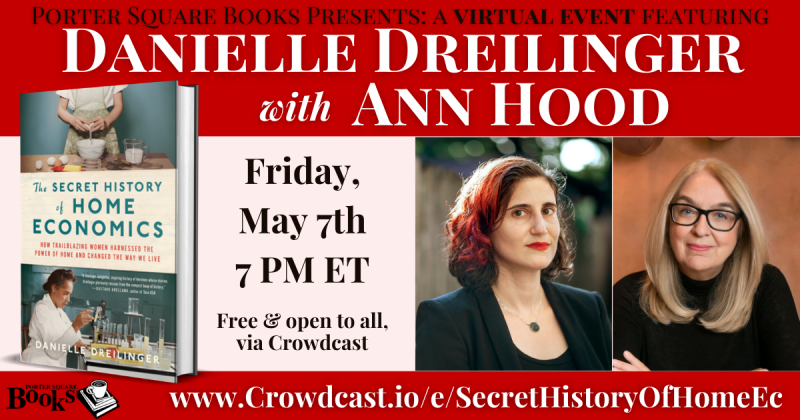 The term “home economics” may conjure traumatic memories of lopsided hand-sewn pillows or sunken muffins. But common conception obscures the story of the revolutionary science of better living. The field exploded opportunities for women in the twentieth century by reducing domestic work and providing jobs as professors, engineers, chemists, and businesspeople. And it has something to teach us today.

In the surprising, often fiercely feminist and always fascinating The Secret History of Home Economics, Danielle Dreilinger traces the field’s history from Black colleges to Eleanor Roosevelt to Okinawa, from a Betty Crocker brigade to DIY techies. These women—and they were mostly women—became chemists and marketers, studied nutrition, health, and exercise, tested parachutes, created astronaut food, and took bold steps in childhood development and education.

Home economics followed the currents of American culture even as it shaped them. Dreilinger brings forward the racism within the movement along with the strides taken by women of color who were influential leaders and innovators. She also looks at the personal lives of home economics’ women, as they chose to be single, share lives with other women, or try for egalitarian marriages.

This groundbreaking and engaging history restores a denigrated subject to its rightful importance, as it reminds us that everyone should learn how to cook a meal, balance their account, and fight for a better world.

Danielle Dreilinger is a former New Orleans Times-Picayune education reporter and a Knight-Wallace Journalism Fellow. She also wrote for the Boston Globe and worked at the Boston NPR station WGBH. She lives in New Orleans, Louisiana.

Ann Hood is the author of the best-selling novels The Book That Matters Most, The Obituary Writer, Somewhere Off the Coast of Maine, The Red Thread, and The Knitting Circle, as well as the memoir Comfort: A Journey Through Grief, which was a New York Times Editor's Choice and chosen as one of the top ten nonfiction books of 2008 by Entertainment Weekly. She has won two Pushcart Prizes as well as a Best American Spiritual Writing Award, two Best American Food Writing Award, and a Best American Travel Writing award. She is the editor of the anthologies Knitting Yarns: Writers Writing About Knitting, Knitting Pearls: More Writers Writing About Knitting, and Providence Noir. Hood is also the author of books for children. She lives in Providence, Rhode Island, and New York City, and is married to the writer Michael Ruhlman.

The Secret History of Home Economics: How Trailblazing Women Harnessed the Power of Home and Changed the Way We Live (Hardcover)