Porter Square Books is delighted to present a virtual event with Darcie Little Badger for her newest novel, A Snake Falls to Earth, longlisted for the National Book Award for Young People's Literature! Joining Darcie in conversation will be Jordan Ifueko, author of the bestselling Raybearer series. This event is free and open to all, hosted  on Crowdcast. This event has a new event date of Thursday, January 27th! 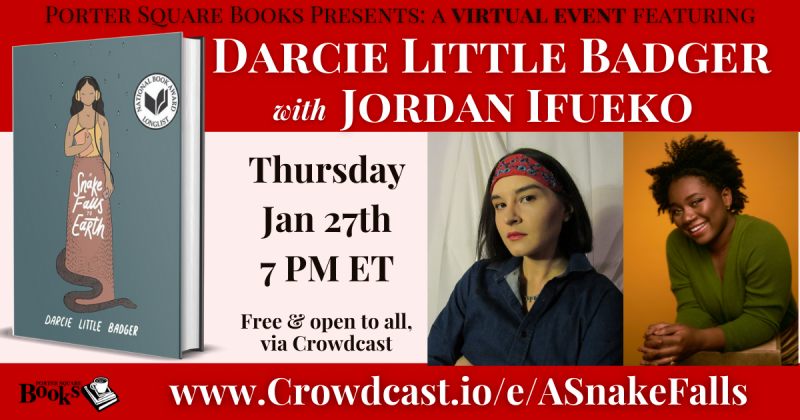 Register to join the event on Crowdcast here: https://www.crowdcast.io/e/asnakefalls

★ "Fun, imaginative, and deeply immersive, this story will be long in the minds of readers."—Publishers Weekly (starred)

Nina is a Lipan girl in our world. She's always felt there was something more out there. She still believes in the old stories.

Oli is a cottonmouth kid, from the land of spirits and monsters. Like all cottonmouths, he's been cast from home. He's found a new one on the banks of the bottomless lake.

Nina and Oli have no idea the other exists. But a catastrophic event on Earth, and a strange sickness that befalls Oli's best friend, will drive their worlds together in ways they haven't been in centuries.

And there are some who will kill to keep them apart.

A Snake Falls to Earth is a breathtaking work of Indigenous futurism. Darcie Little Badger draws on traditional Lipan Apache storytelling structure to weave another unforgettable tale of monsters, magic, and family. It is not to be missed.

Darcie Little Badger is an Earth scientist, writer, and fan of the weird, beautiful, and haunting. She is an enrolled member of the Lipan Apache Tribe of Texas. Her Locus Award-winning debut novel, Elatsoe, was a National Indie Bestseller, named to over a dozen best-of-year lists, and called one of the Best 100 Fantasy Novels of All Time by TIME. Her second novel, A Snake Falls to Earth was longlisted for the National Book Award for Young People's Literature.

Jordan Ifueko (ee-FWEH-koh) is the Nebula Finalist and New York Times bestselling author of the Raybearer series and other stories, including short fiction in the Hugo-nominated magazine Strange Horizons. She’s been featured on NPR Best Books, NPR Pop Culture Hour, ALA Top Ten, Buzzfeed, and other publications. She writes about magic Black girls who aren’t magic all the time, because honestly, they deserve a vacation. Ifueko lives in Los Angeles with her husband David and their 3-legged trustafarian dog Reginald Ovahcomah. Follow Jordan on Instagram @jordanifueko.

Register to join the event on Crowdcast here: https://www.crowdcast.io/e/asnakefalls

A Snake Falls to Earth (Hardcover)