Join Porter Square Books to celebrate the release of bestselling author David Levithan's newest novel for young readers, The Mysterious Disappearance of Aidan S. (as told to his brother)! Levithan will be joined in conversation by Rebecca Stead (The List of Things That Will Not Change). This event is free and open to all, hosted on Crowdcast. 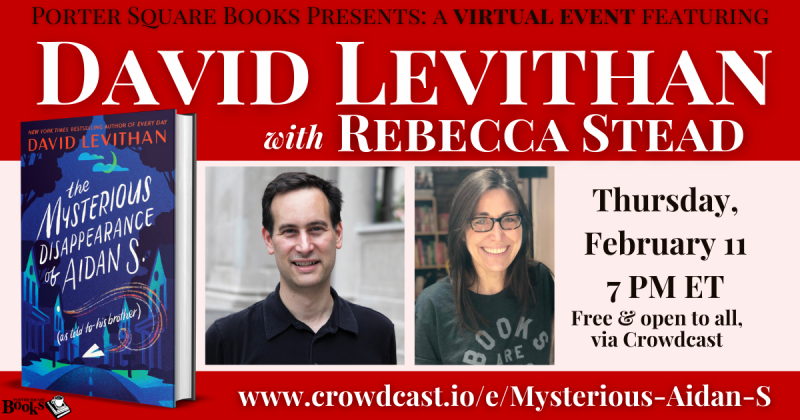 Register to join the event on Crowdcast here: https://www.crowdcast.io/e/mysterious-aidan-s

Aidan disappeared for six days. Six agonizing days of searches and police and questions and constant vigils. Then, just as suddenly as he vanished, Aidan reappears. Where has he been? The story he tells is simply. . . impossible. But it's the story Aidan is sticking to.

His brother, Lucas, wants to believe him. But Lucas is aware of what other people, including their parents, are saying: that Aidan is making it all up to disguise the fact that he ran away.

When the kids in school hear Aidan's story, they taunt him. But still Aidan clings to his story. And as he becomes more of an outcast, Lucas becomes more and more concerned. Being on Aidan's side would mean believing in the impossible. But how can you believe in the impossible when everything and everybody is telling you not to?

Some of David Levithan's many acclaimed novels and story collections include 19 Love Songs, Every Day, Two Boys Kissing, and Boy Meets Boy. His bestselling collaborations include Nick & Norah's Infinite Playlist, Dash and Lily's Book of Dares, and The Twelve Days of Dash & Lily (written with Rachel Cohn) and Will Grayson, Will Grayson (written with John Green). David was named the recipient of the Margaret A. Edwards Award for his contribution to YA literature. You can learn more about him at davidlevithan.com and follow him on Twitter at @loversdiction.

Rebecca Stead is the author of When You Reach Me, which was a New York Times bestseller and winner of the Newbery Medal and the Boston Globe–Horn Book Award for Fiction, and Liar & Spy, which was also a New York Times bestseller, won the Guardian Prize for Children’s Fiction, and was on multiple state master lists and best of the year lists. Her book, Goodbye Stranger, was a Boston Globe–Horn Book Honor Book for Fiction and a New York Times bestseller. She is also the author of First Light, which was nominated for many state awards and her most recent novel, The List of Things That Will NotChange, which received 6 starred reviews. She lives in New York City with her family. Visit her online at rebeccasteadbooks.com and on Twitter at @rebstead.

Register to join the event on Crowdcast here: https://www.crowdcast.io/e/mysterious-aidan-s

The Mysterious Disappearance of Aidan S. (as told to his brother) (Hardcover)

The List of Things That Will Not Change (Hardcover)