Join Porter Square Books in welcoming David Michaelis for a talk on his new biography, Eleanor: A Life--a breakthrough portrait of America’s longest-serving First Lady, rich with family history. This event is hosted in partnership with  American Inspiration series of American Ancestors NEHGS and the State Library of Massachusetts. This event is hosted on Crowdcast, and is free and open to all. 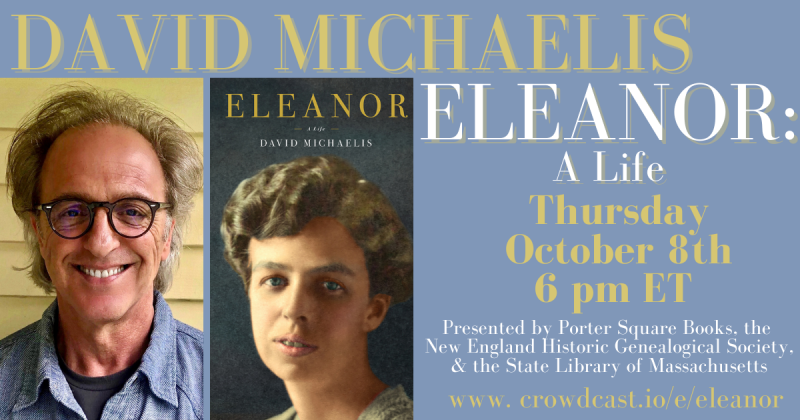 Register to join the event on Crowdcast here: https://www.crowdcast.io/e/eleanor

This cradle-to-grave biography – the first single-volume portrait in six decades - rediscovers Eleanor Roosevelt’s life of transformation, from her Gilded Age childhood as the orphaned niece of President Theodore Roosevelt; to an irreconcilable marriage with her ambitious fifth cousin Franklin, with whom she became a New York “power couple”; to her life-culminating role as world-circling activist, diplomat, and chief architect of international human rights. Drawing on new research, Michaelis’s riveting portrait is rich with insight into Eleanor’s emotional life and relationships, her struggles with motherhood, and role as her husband’s surrogate in which she transformed the career-ending storm of polio into the sunrise of the U.S. president who brought the nation out of the Depression and on to victory in World War II. Don’t miss learning more about this major American figure, a role model for heartfelt and effective political engagement.

David Michaelis is the bestselling author of Schulz and Peanuts and N.C. Wyeth, which won the Ambassador Book Award for Biography.

Register to join the event on Crowdcast here: https://www.crowdcast.io/e/eleanor