Virtual: Denise Bergman with Nina MacLaughlin, The Shape of the Keyhole

Join Porter Square Books for a virtual reading and discussion with poet Denise Bergman for her new collection The Shape of the Keyhole, joined in conversation by Nina MacLaughlin (Wake, Siren)! This event is free and open to all, and is hosted on Crowdcast. 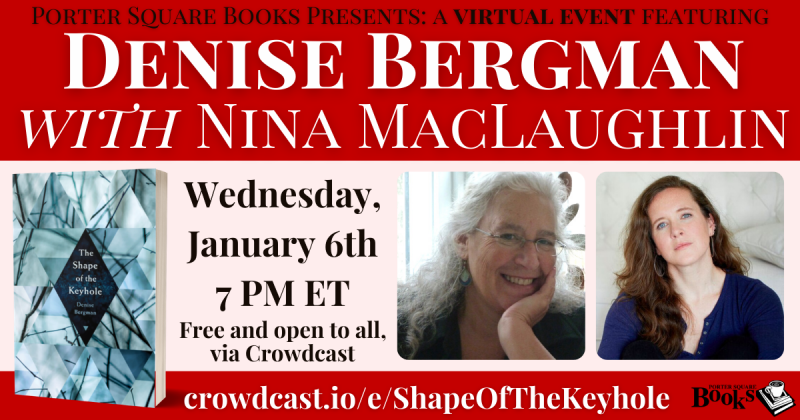 Register for the event on Crowdcast here: hwww.crowdcast.io/e/shapeofthekeyhole

In 1650, in Massachusetts, a woman was falsely accused of killing her friend's child. She was immediately tried and soon hanged. THE SHAPE OF THE KEYHOLE examines a community's fear-driven silence and envisions the innocent woman's days as she awaits her execution.

"This stunning book-length poem creates, from a brief account in colonial American history, an expansive collage of 'dislodged sentiment, fragmented scenes, churned-up voices.' Denise Bergman renders the arrest, trial, and execution of a falsely accused woman in cinematic slow motion and spare lyrical language, heightened by recurrent metaphor and contrapuntal wordplay. A rush of voices speeds up the motion before the final scene, inviting questions of guilt and culpability that are disturbingly relevant to the injustices of our own time."--Martha Collins

"Denise Bergman's compelling new collection, THE SHAPE OF THE KEYHOLE, gives testimony to prejudices, false rumors, mutable scraps of damning evidence that wrongly condemn a woman to die by hanging. Here there is no restorative justice, only questions that singe through to a hushed past: 'Why does no one ask why // she killed a child / would want to kill / a child / that child // could she not stop herself.' In a style reminiscent of cubism and Stein, Bergman's fractured, repetitive language and succinct imagery recreate a sequence of voicings that imprint indelibly on the consciousness of the reader where 'Silence snatches the best view of the finish line.' THE SHAPE OF THE KEYHOLE shines a clarifying light into the dark, unsparing nature of humanity."--Dzvinia Orlowsky

Denise Bergman’s most recent book is The Shape of the Keyhole, Black Lawrence Press, 2020. Three Hands None was published by Black Lawrence Press in 2019. A Woman in Pieces Crossed a Sea was published by West End Press in 2014. The book won the West End Press Patricia Clark Smith Poetry Prize. The Telling, a book-length poem, was published in 2013 by Červená Barva Press. Her book Seeing Annie Sullivan, poems based on the early life of Helen Keller's teacher (Cedar Hill Books), was translated into Braille and into a Talking Book. She was the editor of City River of Voices, an anthology of urban poetry (West End Press), and author of Keyhole Poems, a sequence that combines the history of specific urban places with the present. An excerpt from her poem "Red," about the effects of a slaughterhouse on a neighborhood, is permanently installed in a park in Cambridge, Massachusetts.

Nina MacLaughlin is the author of Wake, Siren: Ovid Resung, a re-telling of Ovid's Metamorphoses told from the perspective of the female figures transformed, published by FSG/FSG Originals in November, 2019. Her first book was the acclaimed memoir Hammer Head: The Making of a Carpenter. Formerly an editor at the Boston Phoenix, she worked for nine years as a carpenter, and is now a books columnist for the Boston Globe. Her work has appeared on or in The Paris Review Daily, The Believer, American Short Fiction, the Los Angeles Review of Books, the Wall Street Journal, Meatpaper, and elsewhere. She carves spoons and lives in Cambridge, Massachusetts.

Register for the event on Crowdcast here: hwww.crowdcast.io/e/shapeofthekeyhole

The Shape of the Keyhole (Paperback)

ISBN: 9781625578242
Availability: In Stock: Click Title to See if it's in CAMBRIDGE or BOSTON
Because of how it is sold to us we cannot accept a return of this title.
Published: Black Lawrence Press - November 16th, 2020