Join Porter Square Books for a virtual talk with theoretical physicist and Nobel laureate Frank Wilczek for the release of his latest book, Fundamentals: Ten Keys to Reality, joined in conversation by Steven Pinker! In Fundamentals, one of our great contemporary scientists reveals the ten profound insights that illuminate what everyone should know about the physical world. This event is free and open to all, hosted on Crowdcast. 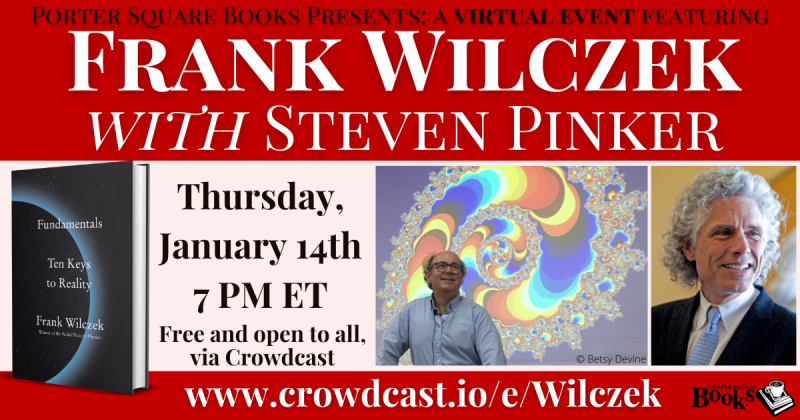 Register here to join the event on Crowdcast: https://www.crowdcast.io/e/wilczek

In Fundamentals, Nobel laureate Frank Wilczek offers the reader a simple yet profound exploration of reality based on the deep revelations of modern science. With clarity and an infectious sense of joy, he guides us through the essential concepts that form our understanding of what the world is and how it works. Through these pages, we come to see our reality in a new way--bigger, fuller, and stranger than it looked before.

Synthesizing basic questions, facts, and dazzling speculations, Wilczek investigates the ideas that form our understanding of the universe: time, space, matter, energy, complexity, and complementarity. He excavates the history of fundamental science, exploring what we know and how we know it, while journeying to the horizons of the scientific world to give us a glimpse of what we may soon discover. Brilliant, lucid, and accessible, this celebration of human ingenuity and imagination will expand your world and your mind.

Frank Wilczek won the Nobel Prize in Physics in 2004 for work he did as a graduate student. He was among the earliest MacArthur fellows, and has won many awards both for his scientific work and his writing. He is the author of A Beautiful Question, The Lightness of Being, Fantastic Realities, Longing for the Harmonies, and hundreds of articles in leading scientific journals. His “Wilczek’s Universe” column appears regularly in the Wall Street Journal. Wilczek is the Herman Feshbach Professor of Physics at the Massachusetts Institute of Technology, founding director of the T. D. Lee Institute and chief scientist at the Wilczek Quantum Center in Shanghai, China, and a distinguished professor at Arizona State University and Stockholm University. Learn more at https://www.frankawilczek.com/.

Steven Pinker is a Johnstone Family Professor in the Department of Psychology at Harvard University. He conducts research on language and cognition, writes for publications such as the New York Times, Time and The Atlantic, and is the author of ten books, including The Language Instinct, How the Mind Works, The Blank Slate, The Stuff of Thought, The Better Angels of Our Nature,The Sense of Style, and most recently, Enlightenment Now: The Case for Reason, Science, Humanism, and Progress.

Register here to join the event on Crowdcast: https://www.crowdcast.io/e/wilczek