Join Porter Square Books to celebrate the launch of local author Hannah Reynold's debut young adult novel, The Summer of Lost Letters -- a confection that will leave readers eager for a summer in Nantucket and their own perfect romance" (Kirkus Reviews)!  Hannah will be joined in conversation by Caroline Linden! This virtual event is hosted on Crowdcast and is free and open to all. Signed copies of the book are available -- preorder your copy now to receive a bookmark, stickers and bonus deleted scene! 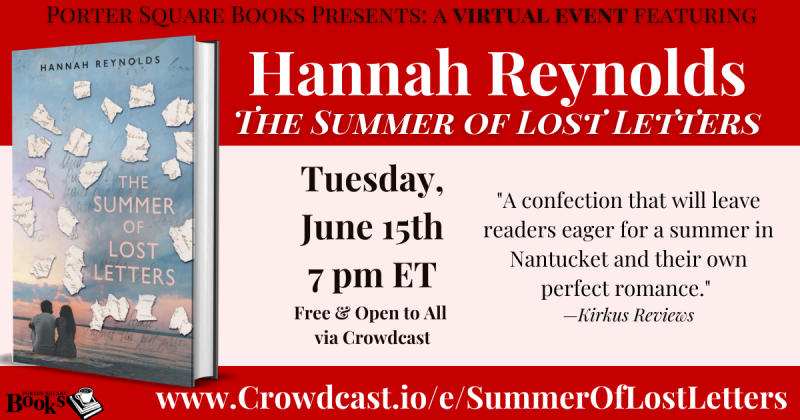 Register to join the event on Crowdcast here: https://www.crowdcast.io/e/summeroflostletters

Perfect for fans of Morgan Matson and Ruta Sepetys, this sweet, summery romance set in Nantucket follows seventeen-year-old Abby Schoenberg as she uncovers a secret about her grandmother's life during WWII.

Seventeen-year-old Abby Schoenberg isn't exactly looking forward to the summer before her senior year. She's just broken up with her first boyfriend and her friends are all off in different, exciting directions for the next three months. Abby needs a plan--an adventure of her own. Enter: the letters.

They show up one rainy day along with the rest of Abby's recently deceased grandmother's possessions. And these aren't any old letters; they're love letters. Love letters from a mystery man named Edward. Love letters from a mansion on Nantucket. Abby doesn't know much about her grandmother's past. She knows she was born in Germany and moved to the US when she was five, fleeing the Holocaust. But the details are either hazy or nonexistent; and these letters depict a life that is a bit different than the quiet one Abby knows about.

And so, Abby heads to Nantucket for the summer to learn more about her grandmother and the secrets she kept. But when she meets Edward's handsome grandson, who wants to stop her from investigating, things get complicated. As Abby and Noah grow closer, the mysteries in their families deepen, and they discover that they both have to accept the burdens of their pasts if they want the kinds of futures they've always imagined.

Hannah Reynolds grew up outside of Boston, where she spent most of her childhood and teenage years recommending books to friends, working at a bookstore, and making chocolate desserts. She received her BA in Creative Writing and Archaeology from Ithaca College, which meant she never needed to stop telling romantic stories or playing in the dirt. After living in San Francisco, New York, and Paris, she came back to Massachusetts and now lives in Cambridge.

Caroline Linden was born a reader, not a writer. She earned a math degree from Harvard University and wrote computer code before discovering that writing fiction was far more fun. Since then, the Boston Red Sox have won the World Series three FOUR times, which is not related but still worth mentioning. Her books have been translated into seventeen languages, and have won the NEC-RWA Reader's Choice Award, the Daphne du Maurier Award, the NJRW Golden Leaf Award, and RWA's RITA Award. She lives in New England.

Register to join the event on Crowdcast here: https://www.crowdcast.io/e/summeroflostletters

The Summer of Lost Letters (Hardcover)